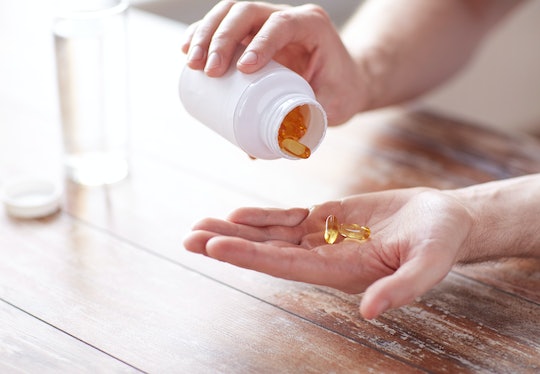 FDA Warns Dietary Supplement Ingredient May Be Linked To Miscarriage

When it comes to ensuring the safest and healthiest pregnancy possible — whether you're trying to conceive now, or are planning to in the future — so much can be linked back to the foods and drinks you've consumed as well as the medication and supplements you've taken. Many women are already very cautious when it comes to what they consume during pregnancy, and now, new research is showing that there might be one more thing to be wary of. Earlier this week, the U.S. Food and Drug Administration (FDA) issued a warning for women of childbearing age about a dietary supplement ingredient that may be linked to miscarriages and could potentially cause harm to a fetus.

On June 3, the FDA alerted consumers to a recent report issued by the National Institute of Health's National Toxicology Program, regarding the consumption of Vinpocetine. According to the FDA, the supplement ingredient has been associated with adverse reproductive effects, such as miscarriage or harm to fetal development.

Vinpocetine is a "man-made chemical resembling a substance found in the periwinkle plant Vinca minor," according to WebMD, and is used for neurological supplementation. Some believe it could improve blood flow to the brain, therefore enhancing memory and preventing Alzheimer's, as well as other conditions that harm learning, memory, and information processing.

The dietary supplement is known to increase cranial blood flow, and some research has suggested it can improve memory or focus. The FDA, however, is specifically concerned about the presence of the ingredient used with women of childbearing age, which means women who are either trying to get pregnant, or could get pregnant in the near future.

For those who are concerned as to whether or not Vinpocetine might be used in a supplement you are currently taking, first be especially cautious using any supplements that claim to help improve memory, focus, mental acuity, energy and weight loss. You can also check the ingredient list on the bottle or online. And, of course, you can always consult a trusted health care professional.

However, it is also important to be aware that, as USA Today reported, toxicology tests have confirmed that a "significant number of products" that contain Vinpocetine actually had more of the ingredient than what was stated on the label, meaning it is easier to consume a higher dose than one thinks. As USA Today reported, common supplements known to contain Vinpocetine include Nature's Answer Periwinkle Herb Organic Alcohol Fluid Extract, Life Extension Vinpocetine, and Pure Naturals Vinpocetine.

The best way to ensure that you are safe is to always consult with your own doctor regarding your supplements and vitamins before, during and after pregnancy.