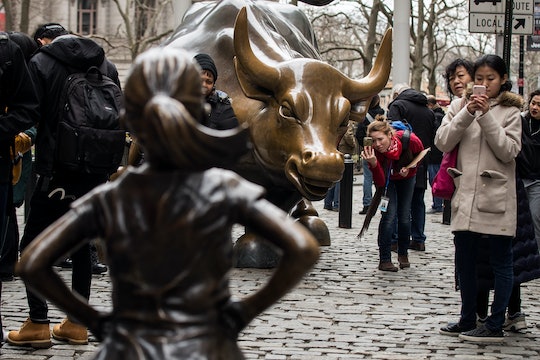 "Fearless Girl" Is Here To Stay (For Now)

In Lower Manhattan, a bronze statue of a little girl bravely staring down the full might of Wall Street has become a wildly popular, even provocative, symbol of gender equality and a growing feminist movement. Reactions to the iconic “Fearless Girl” statue have been powerful, running the gamut from enthusiasm to skepticism, and resulted in thousands of calls for New York lawmakers to allow the statue a permanent home on Wall Street. And now, it seems that “Fearless Girl” — much like the movement she’s come to represent — isn’t going away anytime soon. New York City Mayor Bill de Blasio announced Monday that the “Fearless Girl” statue will stay on Wall Street for at least another year. Let’s hope that means the conversation about the importance of representation for women and girls isn’t going away anytime soon, either.

State Street Global Advisors commissioned the statue as part of its campaign to see more women on corporate boards and had it installed just in time to show solidarity with demonstrations around International Women’s Day. Speaking to The Atlantic in early March, SSGA CEO Ron O’Hanley said that the financial giant saw “Fearless Girl” as a way to put public, lasting pressure on some of the world’s biggest companies to pay more attention to gender diversity.

In a statement, officials explained,

There has been progress made in diversity overall as well as diversity on boards. I don’t mean to suggest no one is doing anything. A lot of companies are working very hard. But we are frustrated because a quarter of the Russell 3000, and these are the biggest companies in America, have no women board members. We don’t know what the right number is, but diversity of thought is a good thing, and our sense was that we needed to be a little sharper. We didn’t just want to say words. What we are saying is that we will be looking at this and it will be negative for you if we walk away feeling like you are not taking any steps.

The image of a ponytailed little girl, hands on hips, ready to take on the best the financial markets had to offer had immediate effect. The statue, created by artist Kristen Visbal, quickly became popular with photographers and visitors to the world’s financial center during the Day Without a Woman demonstrations; Fans online saw it as an embodiment of the idea that women and girls are powerful enough to overcome any obstacle. Though SSGA was originally granted a standard one-week permit for the public art demonstration, according to CNN, that permit was extended through April 4. And, as the crowds of visitors grew and images of “Fearless Girl” standing through snowstorms took over the internet, more than 28,000 people signed a Change.org petition to make the statue permanent.

NY Assemblywoman Yuh-Line Niou, who represents Manhattan’s financial district, has been particularly vocal about keeping the statue in place. Earlier this month, Niou presented a letter signed by 50 female elected officials supporting “Fearless Girl” and calling on city and state leaders to make it a permanent exhibit.

Not everyone was enthralled with the statue or its associated message. Some critics took to social media to blast the statue’s connection to a corporate PR scheme and the idea that anyone (of either gender, really) would want to stand against a bullish economy. “Charging Bull” artist Arturo Di Modica called Fearless Girl an “advertising trick” and dismissed its connection to female empowerment. Others called out the idea that one global behemoth was using a female image — and a flat, non-threatening one at that — to force other global behemoths into conversation about board diversity rather than, say, the gender pay gap or hiring inequality. And some pointed out that, with women holding fewer than 1 in 3 of its board positions, State Street isn’t exactly the epitome of diversity itself.

State Street did not immediately respond to Romper’s request for comment, but in a Huffington Post interview earlier this month, the company’s head of public relations, Anne McNally, defended the company, saying that when it comes to gender parity, some progress is better than none. McNally also pointed out that some 1 in 4 of the nation’s biggest companies have no women on the board at all, making SSGA’s 27 percent a bit of an outlier.

That’s why, despite the controversy, having another year with "Fearless Girl" is undoubtedly a good thing. Representation matters, especially when the goal is encouraging young women to consider taking on a male-dominated industry. The statue isn’t a perfect image of womanhood, but then no single statue could ever be. Still, as a symbol, it forces a public conversation about gender, parity, and leadership that is badly needed. In a world where even a "Fearless Girl" deals with sexism and abuse, that kind of discourse should be encouraged. And it looks like it will be, for at least one more year.