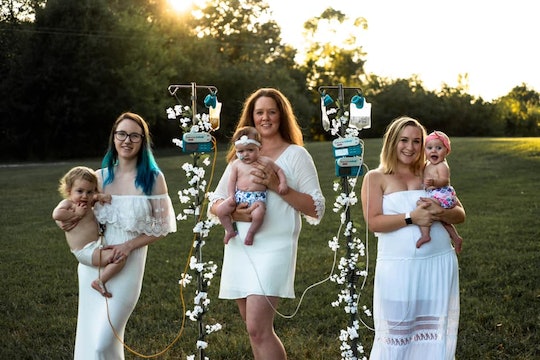 Often times, the bond between a mother and child is symbolically depicted through images of breastfeeding. But what about mothers who can't or choose not to breastfeed? In an effort to celebrate all forms of feeding and show appreciation for all mothers, one photographer held a "Fed Is Best" photo shoot, and the results were truly beautiful.

"I held a 'fed is best' shoot," Anna Stacy Poteet of Anna Stacy Photography in Chattanooga, Tennessee, wrote in a recent Facebook post. "The original idea was to have moms come out and show love and appreciation for other moms no matter how they feed their babies." But according to Poteet, the shoot took on a new meaning when only tube-feeding mamas showed up.

Three moms, all of whom are parents to children who take their meals through feeding tubes, showed up to Poteet's photo shoot. And, true to her word, Poteet captured the love and special bond present between each mother and child as well as the unique, beautiful way in which they are fed.

Due to issues with swallowing and severe reflux, 6-month old Katherine (whose smiling cherub-like face is impossible to miss in Poteet's photos) was first placed on a feeding tube when she was just 3 months old. "She struggled with constant vomiting, leading to poor weight gain," Poteet quoted Katherine's mother as having said about the decision to place her on a feeding tube. "For the next two months she was fed at a slow rate over 20 hours a day. She began to gain weight and we focused on how to manage her reflux and improve her swallowing abilities."

Katherine ended up having a surgical procedure to treat her reflux. She has also since had the nasal feeding tube she was initially placed on replaced with one inserted into the stomach through the abdomen, often referred to as a gastrostomy tube, or G-tube. "She is now thriving with her G-tube and is going to be mobile before we know it," Poteet quoted Katherine's mother as having said. "Her swallow reflux is improving and she is loving being able to eat baby food! She is definitely the happiest baby I know!"

Two-year-old Bellamy also has a feeding tube inserted through his abdomen. Although his mother described him as "a spunky dude," she also noted that, at roughly the size of an average 1-year-old, he was small for his age. "Bellamy is considered failure to thrive, due to being an overly picky eater," Poteet quoted his mother as having said. On top of being a picky eater, Bellamy also has allergies and acid reflux, which cause him stomach pain after eating and ultimately make it so he doesn't ingest enough calories orally.

"After trying food therapy, calorie drinks, and many other methods for many months, he ended up needing a G-tube," Poteet quoted Bellamy's mother as having said. "In just three weeks, he has already gained 3 pounds and has gone from less than 1 percent to 2 percent. He is now thriving instead of surviving."

While 5-month old Hailey is also fed primarily via a feeding tube, hers is a nasojejunal, or NJ, tube, meaning it's inserted through the nose and passes through the stomach to deliver food directly to the small intestine, as Cincinnati Children's Hospital Medical Center explains.

"She was born full term, but from the get go had issues with nursing and even taking a bottle," Poteet quoted Hailey's mother as having said. Reflux, troubles with swallowing, multiple cases of oral thrush, and allergies to dairy, soy, and coconut further added to Hailey's difficulties eating and ultimately led doctors to deem her as "failing to thrive" and and move to insert a nasal-feeding tube.

"Since then, she's failed a second swallow study ... and she no longer takes anything by mouth," Poteet quoted Hailey's mother as having said. The family is working with a local hospital to uncover the root of Hailey's swallowing problems and encourage her to eventually learn to eat and drink. "We call her Bug, and she's a delightful little 5 month old," Hailey's mother said, according to the post. "Our journey is just beginning and we have a long way to go, but she's a fighter!"

While the benefits of breastfeeding are well known, some mothers find that, for a variety of reasons, breastfeeding isn't doable or simply isn't for them. But all too often, unfortunately, those who opt to feed their children in other ways end up unfairly facing shame and judgement from others. Poteet's photo shoot is a wonderful way to show that maternalism takes many forms, and all mothers deserve to feel appreciated for the love and care they extend to their children.