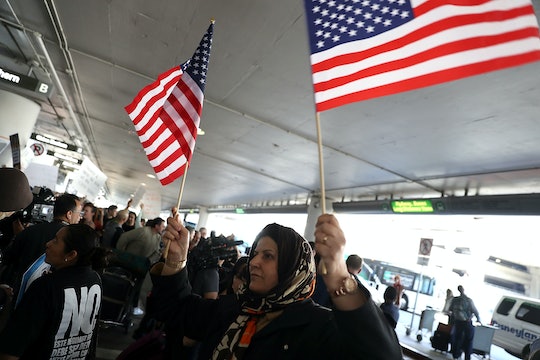 In a win for immigration activists on Thursday, a federal appeals court upheld an earlier travel ban suspension halting a President Trump's executive immigration order, which barred travelers and refugees from seven Muslim-majority countries from entering the United States. The decision maintained U.S. District Judge James Robart's ruling from Feb. 3, which placed a stay on the travel ban and reversed scores of visa suspensions, inviting a flurry of debate on both sides of the aisle. The court issued its unanimous 29-page ruling just after 3 p.m. Pacific Time.

"To rule on the Government’s motion, we must consider several factors, including whether the Government has shown that it is likely to succeed on the merits of its appeal, the degree of hardship caused by a stay or its denial, and the public interest in granting or denying a stay," the court wrote in its decision, citing the government's petition for an emergency reinstatement of the order, following Robart's ruling on Feb. 3. The court continued,

We assess those factors in light of the limited evidence put forward by both parties at this very preliminary stage and are mindful that our analysis of the hardships and public interest in this case involves particularly sensitive and weighty concerns on both sides. Nevertheless, we hold that the Government has not shown a likelihood of success on the merits of its appeal, nor has it shown that failure to enter a stay would cause irreparable injury, and we therefore deny its emergency motion for a stay.

"SEE YOU IN COURT," Trump wrote angrily, in all-caps. "THE SECURITY OF OUR NATION IS AT STAKE!"

The state of Washington, which, along with Minnesota, filed an official challenge to Trump's order, reacted in stark contrast to Trump's words. "DENIED. UNANIMOUS. PER CURIUM," Attorney General Bob Ferguson's office wrote. In a follow-up tweet, the AG's office highlighted the conclusion of the ruling. "For the foregoing reasons, the emergency motion for a stay pending appeal is DENIED," an image of the ruling read.

Though the ruling, as previously mentioned, is not permanent, it's still promising news to the many activists who flocked to airports nationwide over the past week and a half. In layman's terms, the court argued in its decision that the government had not adequately provided evidence that a non-reversal on Robart's stay would cause irreparable damage — essentially, the government had not proved that there was a dire need to re-write the immigration rules in the first place.

The fight against the travel ban may not yet be over, but for now, to those who have been fighting it for what feels like forever, the victory feels sweet.