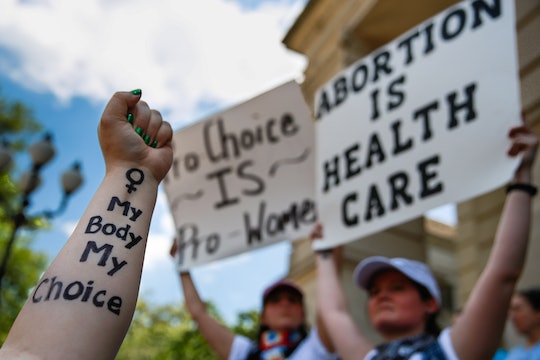 Anti-choice laws have dominated the news recently, especially where it concerns abortion bans. Although some laws are outright bans, others are disguised as a "heartbeat bill," meaning abortions will be illegal and punishable by law once a heartbeat can be detected (which oftentimes is at six weeks, before a woman even knows she's pregnant). Well, there's finally some good news for pro-choice advocates because a federal judge has blocked Ohio's heartbeat bill, calling it an "insurmountable" obstacle to women.

More Like This
The Obamas’ New Family Rule? Get Vaccinated If You Want To Hang Out With Us
Biden Proposes Plan To Give Every Child Free “High-Quality” Preschool
A Private School In Miami Says It Won't Employ Vaccinated Teachers
The FDA Has Authorized The Pfizer Vaccine For Kids As Young As 12

On Wednesday, July 3, a federal judge temporarily blocked an Ohio law that would have banned abortions after a fetal heartbeat could be detected — which can be as early as six weeks — and included no exceptions for rape or incest, a call that was made by U.S. District Judge Michael Barrett, according to CBS News. Without his action, the law would have gone into effect on July 11, but now clinics are allowed to provide abortions amid the legal battle.

Barrett wrote in his ruling that if the law had gone into effect, "one could characterize the obstacle Ohio women will face as not merely 'substantial,' but, rather, 'insurmountable,'" according to CNN. He also said that the the plaintiffs — which include the American Civil Liberties Union (ACLU) of Ohio and Planned Parenthood — have a case because the law is unconstitutional. "The Court concludes, based on current United States Supreme Court precedent, that Plaintiffs are certain to succeed on the merits of their claim that S.B. 23 is unconstitutional on its face," he wrote.

In his 12-page decision, Barrett further explained his reasoning, stating, according to HuffPost: "Assuming a patient does know that she is pregnant, there are certain logistical obstacles to obtaining abortion care before six weeks in pregnancy." Barrett's examples include taking time off from work, figuring out transportation, and obtaining money for the procedure.

Barrett continued, "These reasons explain why the vast majority of abortions in Ohio — approximately 90% — take place at or after six weeks."

Pro-choice advocates applauded Barrett's decision, including Freda Levenson, legal director for the ACLU of Ohio. "Today, the court has upheld the clear law: women in Ohio ... have the constitutional right to make this deeply personal decision about their own bodies without interference from the state," Levenson told Reuters.

If you remember, Ohio Gov. Mike DeWine signed the heartbeat bill into law in April after similar legislation was vetoed twice by former Gov. John Kasich. And Ohio isn't alone — in 2019, several states have passed laws restricting a woman's right to choose, subsequently challenging Roe v. Wade in the process, as The New York Times reported. Aside from Ohio, this list includes:

The future remains to be seen, but it's possible Barrett's decision in Ohio is promising for plaintiffs in similar legal battles in these aforementioned states and others. Either way, a federal judge temporarily blocking Ohio's unconstitutional heartbeat bill is definitely a step in the right direction toward upholding a woman's right to choose.