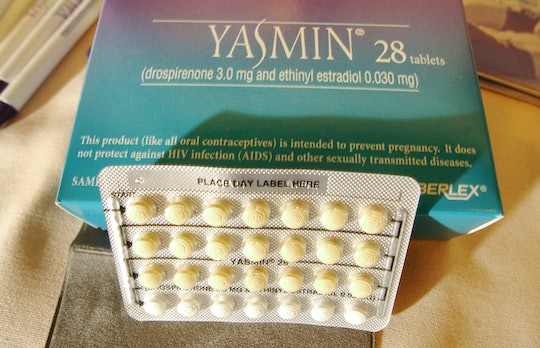 Back in October, the Trump administration rolled back an Obama-era rule that required employer-provided health insurance policies to cover birth control at no cost to women. In doing so, any company or nonprofit organization would be able to exclude coverage for moral or religious reasons — effectively making it possible for employers to strip women of essential healthcare. Thankfully, there is some good news for women (and men!) who rely on birth control to prevent pregnancy, and/or to treat a number of other health conditions. That's because a federal judge has blocked Trump from taking away birth control coverage, and women across the nation are collectively rejoicing.

When the rollback went down, director of the Department of Health and Human Services' Office of Civil Rights, Roger Severino, said the majority of companies would continue providing birth control coverage, and that only a small percentage of women would be affected by the changes, NPR reports. "This provides an exemption, and it's a limited one," Severino said, according to the publication. "We should have space for organizations to live out their religious identity and not face discrimination." Fast-forward to Dec. 15, and a Pennsylvania judge has now placed an injunction on that order, which temporarily blocks it from going into effect nationwide, reports The Hill. Cue: Women slow clapping from sea to shining sea.

So who do we have to thank for this last-minute (albeit temporary) save? That would be U.S. District Judge Wendy Beetlestone. In her 44-page opinion, according to Politico, Beetlestone wrote, “The Commonwealth’s concern is absent available cost-effective contraception, women will either forgo contraception entirely or choose cheaper but less effective methods — individual choices which will result in an increase in unintended pregnancies." (Well, duh.) "That in turn will inflict economic harm on the Commonwealth because unintended pregnancies are more likely to impose additional costs on Pennsylvania’s state-funded health programs.”

Beetlestone argued that an employer could very well stop providing birth control coverage to women for a number of reasons — other than religious or moral beliefs — and simply use the rule as a loophole. “It is difficult to comprehend a rule that does more to undermine the Contraceptive Mandate or that intrudes more into the lives of women,” Beetlestone said, according to Reuters. This injunction follows a lawsuit filed by state Attorney General Josh Shapiro against the administration, according to PhillMag.com. As a result, Beetlestone's injunction will remain in place across the nation until that trial is over.

Naturally, Twitter was pretty pumped about this turn of events in favor of women's health. "Judges, lawyers, IC & journalists are, literally, saving our country," one person tweeted. Another person wrote, "How is it ethical for ANY employer to impose their so called religious beliefs on any woman pertaining to her PERSONAL life? Especially when it has absolutely nothing to do with her job performance. MIND YOUR OWN BUSINESS AND KEEP MY UTERUS OUT OF IT!" I couldn't have said it better myself.

I don't currently take any form of contraception, but when I'm done having children, I know there will be a time in my life when I will. Regardless of my personal association with birth control, millions of women in the U.S. rely on some form of it for a plethora of reasons — and avoiding unintended pregnancies is just the tip of the iceberg. I have a very close friend who suffers from polycistic ovarian syndrome (PCOS,) which can cause heavy and irregular periods, pelvic pain, infertility, weight gain and mood swings, among other unpleasant symptoms. Although she would love nothing more than to start a family, my friend takes oral contraceptives to help with this often-debilitating condition. Not to mention, birth control is also used to treat conditions like endometriosis, acne, irregular periods, period cramping, menstrual-related migraines and more, according to NPR.

So for those who have "moral objections" to birth control, the answer is simple: Don't take birth control. The end. Because imposing your beliefs on other people — and thereby stripping them of medication prescribed to them by their doctors, which has absolutely nothing to do with you — is completely unacceptable. And we won't go down without a fight.