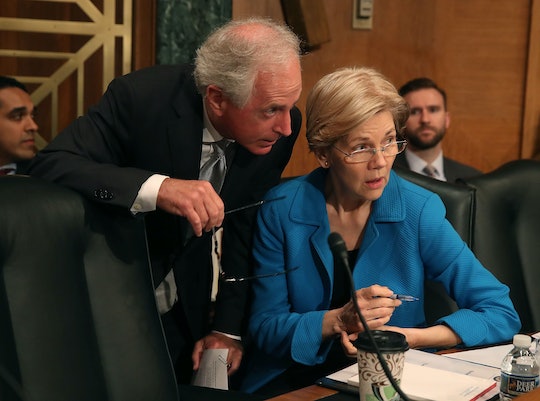 How These Democrats Are Protecting Incarcerated Pregnant Women

These days, it can easily seem like there's just no good news anymore. From all the political viciousness in Washington, D.C., to international terror attacks and the refugee crisis, the world seems to be in a fairly sad state right now. But, there are still plenty of people out there fighting for the rights of others, and working towards making the world a better place. More specifically, a group of senators is now moving to change the way federal prisons treat pregnant women and female inmates in general — and it's an important change, to say the least.

Several top Democratic lawmakers have banded together to propose a new bill, The Dignity For Incarcerated Women Act. The bill aims to better the treatment of females in federal prison, especially pregnant inmates. As of now, federal prisons still shackle pregnant women, and place them in solitary confinement. But this bill looks to change that, as well as mandate other important issues facing incarcerated women. Sens. Cory Booker (New Jersey) and Elizabeth Warren (Massachusetts) introduced the legislation, which is also being co-sponsored by Kamala Harris (California) and Dick Durbin (Illinois).

According to Booker, who spoke with HuffPost about the bill, "It is in the societal interest to support families when members of those families are incarcerated." And as the number of incarcerated women in America has increased by about 700 percent since 1980, the laws surrounding women in prison also need to change. (Because being pregnant is already difficult, as many women know.)

If passed, according to New York Magazine's The Cut,

The bill would require federal prisons to supply women with free tampons and pads, would prevent pregnant women from being shackled or placed in solitary confinement, and would extend inmates’ visiting hours with their children.

Currently, prisons in the United States only provide women with a "limited amount of feminine hygiene products," and they "are often of poor quality and not useful," per HuffPost. Clearly, American prisons aren't exactly on the feminism train just yet. The bill's other main focus, prohibiting the shackling and solitary confinement of pregnant inmates, is a huge issue for women in prison, as so many of them have previously been abused, and being treated so poorly while pregnant could increase anxieties and cause PTSD.

More important than any logistical mandate that this new bill proposes, though, is the fact that the value of human life isn't forgotten. While women in prison are often serving time as punishment for certain crimes committed, that doesn't mean that they should be tossed aside like they're worth nothing. As Booker said, "We need to create a prison that, yes, is holding people accountable, and yes, is allowing people to pay their debt to society for mistakes they have made, but also is about the dignity of humanity."

As research has shown, nearly 40 percent of incarcerated women in federal prisons reported being abused prior to their sentencing. Speaking at a press conference announcing the bill, Warren referenced to those trends. "The majority of women in prison, as Sen. Booker said, are themselves victims of physical or sexual abuse," she said. "It means we're talking about women who have already faced enormous challenges in their lives, who are trying to hold families together, and who end up incarcerated."

Furthermore, 24 percent of incarcerated women in state prisons were brought in on drug charges, making females more likely to be imprisoned for drug offenses than men, although the number of females in federal prisons on drug charges are unknown. Nevertheless, the fact remains that, in or out of prison, a person is a person, and deserves to be treated with some basic level of decency.

Hopefully, The Dignity For Incarcerated Women Act garners bipartisan support. Because supporting women shouldn't be a political issue. To echo Booker's sentiments, "We’ve got to be a better society than this."