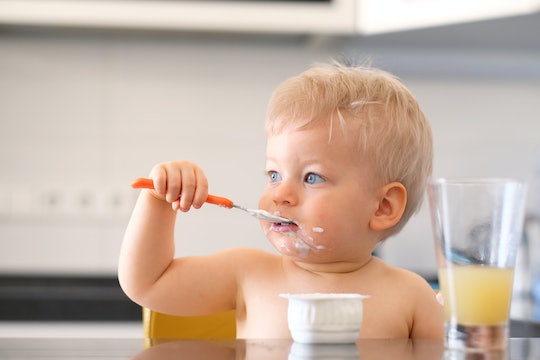 Parents of children who suffer from severe allergies are keenly aware of how these health conditions impact their lives. From what foods are allowed to be in their houses, to always having emergency medications on hand, to where they're allowed to go in public, having a child with severe food allergies takes over most aspects of a family's day-to-day activities. Although it's been determined that a child's risk for allergies does have a genetic component, many studies have suggested that introducing allergens early on — along with other lifestyle choices — can actually help prevent allergies later in life. And apparently, feeding babies yogurt could reduce their risk of allergies, according to a new study.

The results of a New Zealand study found that babies who were regularly fed yogurt had significantly lower rates of allergies and eczema, Health Central reported. A total of 390 mothers in Auckland and Wellington were involved in this study, which was funded by the Health Research Council and published in the journal Clinical and Experimental Allergy in late March. Researchers — who were from the University of Auckland and the University of Otago, Wellington — monitored the infants for signs of eczema. Babies in the study were also given skin prick tests for allergies when they reached age 1. “We found up to 70 per cent reduction in eczema and allergy in the first year of life for daily consumers,” lead researcher Dr. Julian Crane said, according to the South China Morning Post. “The more regularly yogurt was given, the greater the effect.”

Currently, full fat, plain, unsweetened yogurt is recommended by New Zealand's Ministry of Health, the World Health Organization, and other organizations, for infants starting at 6 month of age, according to the Healthy Start Workforce Project. The study's researchers said these findings should help promote the practice even further — particularly for parents who might be worried about their child's elevated risk for allergies and/or eczema. “We found that regular consumption of yogurt gave stronger protection, but what we don’t know yet, is what type of yogurt is best or how much is protective,” Crane noted in a news release. However, it's important to take these findings with a bit of perspective, Crane added.

What we have found is an ‘association’ – i.e. infants who were fed yogurt had less eczema and were less likely to be allergic. At least two other things could explain this.

To put it simply, parents who give their babies yogurt could very well be doing other things that are reducing the risk. (It's just researchers aren't aware of them.) Additionally, parents with children who have a higher risk for allergies and eczema may be purposefully avoiding yogurt. This in turn, might give the false appearance that yogurt is offering protection. “We don’t think this is the case, but only a trial where parents can’t choose yoghurt could prove this,” Crane said in the release.

Of course, this isn't the first study to ever explore the link between probiotics (which are found in yogurt) and eczema, according to the National Center for Biotechnology Information. In fact, for children with a higher genetic risk for developing eczema — like a family history, for example — studies have found evidence that probiotic dietary supplements can help prevent them from developing the itchy skin condition.

To me, it's interesting how guidelines surrounding food allergies have changed in recent years. AAP guidelines for the introduction of peanuts in infants, for example, experienced an about-face early last year. Instead of avoiding peanuts for the first year, parents are encouraged to practice early introduction — which varies slightly depending on a child's risk factors.

As for feeding babies yogurt to reduce their risk of allergies? It seems as if another study with a larger sample size is warranted — in addition to a study that has a control group in which parents refrain from giving their infants yogurt. Still, this recent study does seem promising. Because as the wife of someone who has a severe food allergy, I know I'm willing to do whatever it takes to help my children avoid similar allergy issues in the future. And if something as simple as giving my babies yogurt makes a difference, then you can bet I'd be on board in a heartbeat.

More Like This
Gov. Abbott & Other Republicans Condemned President Biden For Feeding Immigrant Babies
Here’s What You Need To Know About That Viral 1960s Baby Formula “Recipe”
Gerber's New Spokesbaby Isa Has The Biggest Brown Eyes & Was Born With A Limb Difference
The Baby Formula Shortage Is Impacting Real Families & Hospitals