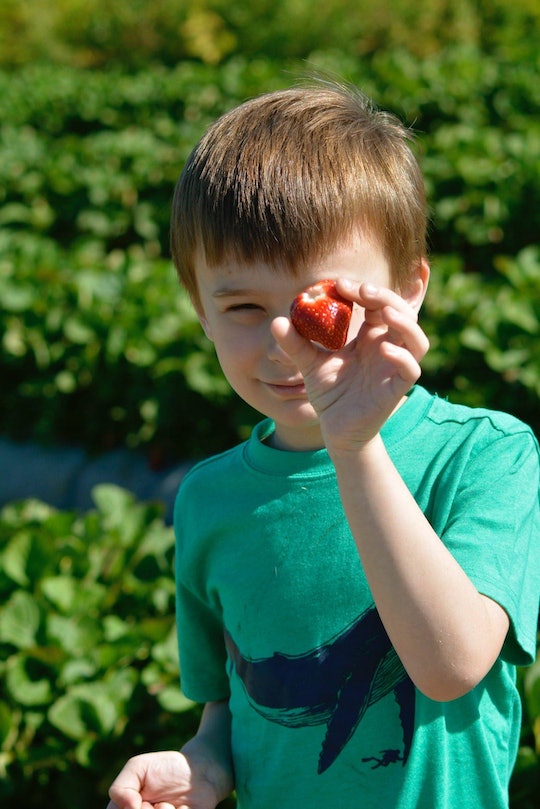 I'll Make My Kid Whatever He Wants To Eat, Because It's Not Worth The Fight

A few nights ago I made an awesome roast chicken dinner with carrots, mashed potatoes, gravy — and a grilled cheese sandwich. That's because no matter what the rest of our family eats in the evening, I'll fix whatever my son will eat, because it's not worth the hassle. Autism has a way of complicating the most mundane activities and in our family, it has chosen dinner as its main stage.

Luckily, the major meltdowns over mealtimes have eased as he's grown older. At 11, Jacob's found coping mechanisms that help him avoid the anxiety of his younger years and he has grown a touch more flexible when it comes to food. For example, that night he ate his sandwich, a few pieces of chicken, and three bites of carrot. But if I want him to eat — and I really need him to, thanks to other contributing factors — I know that his dinner has to be on a short list of pre-approved foods and textures.

Our first serious incident with Jacob came one fall day when he was barely 2. He'd come down with a mystery fever the night before, and that little nugget had spit out every attempted dose of Tylenol or Motrin over the last 18 hours. I kept him close that morning, and he seemed pretty OK since his fever hadn't topped 100 degrees — yet. But as the morning progressed, he became lethargic and flushed. His temperature had risen past 100 degrees. Pulling out the fever reducer again, I decided to hold him down and force it down his throat because I loved him and he was being ridiculous. He won, however, and my sheets and shirt were splattered with the berry-flavored goo.

We hadn't known it at the time, but Jacob was exhibiting the first signs of autism, which often makes its entrance through sudden food aversions. We now know he has Sensory Processing Disorder like many kids on the spectrum, and it inhibits his brain's ability to interpret information from his five senses. In our son's case, it seemed that anything slimy, mushy, and un-chewable was coming off the menu. It extended to foods he previously enjoyed that became soft after chewing, like black beans and rice. He's an older kid now and has worked through some of these issues, but after 10 years of dealing with this, no one — not even Jacob — can pinpoint what he finds intolerable in the majority of food items. Oatmeal is cool, for instance, but soup is the worst. Macaroni and cheese is good, but only from a box. He still considers purées in any form, like mashed potatoes or applesauce, an abomination to the palate and a crime against nature.

Autism has a way of complicating the most mundane activities and in our family, it has chosen dinner as its main stage.

Feeding disorders for children with autism is a complicated topic. Many children are naturally picky eaters, but it doesn't result in malnutrition, anorexia, or painful digestive issues like it does for kids on the spectrum. Sensory disorders and poor digestion have been tossed around as culprits, as has the idea that limited food preferences align with the child's inherently rigid nature. Autism demands sameness, routine, and extraordinarily little variation in day-to-day activities, so when you're 4 years old, you can simply refuse to eat anything but chicken nuggets and Nutrigrain bars to satisfy that need.

These kids, unlike their typically developing peers, will push their food aversion to a point where their health is endangered. The usual methods of coaxing kids to eat, like limiting their snacks so they eat the meals provided to them, can be dangerous for kids on the spectrum because they aren't engaged in a battle of wills like their counterparts, according to the Indiana Resource Center for Autism. In a 2010 study in the Journal of Pediatrics, children on the autism spectrum were found to be more likely to be deficient in a whole host of vitamins and nutrients than neurotypical kids, especially vitamin D and calcium. Researchers from another study concluded that while participating ASD kids were classified as picky eaters by their parents, they ate willingly 20 or fewer acceptable foods, showing that hunger is not a relevant factor in their selectivity. 62 percent of those same kids refused to take medicine as well.

These kids, unlike their typically developing peers, will push their food aversion to a point where their health is endangered.

I wish I could say I was eventually able to get Jacob to swallow his medicine without traumatizing him, but the situation only deteriorated over the next hour or two. His fever climbed close to 105 degrees — the doctor's cut-off for taking him to the hospital — and I couldn't move him to purchase the suppositories she had recommended. If he had just enjoyed the sugary medicine like every other toddler, the whole situation could have been avoided. He was barely 2 years old, and right about this time a few things seemed off, including his newly exclusive diet. Each well-check with his previous pediatrician resulted in a longer list of missed milestones. Incidents of inexplicable balls-out meltdowns were stacking up and he passed his time listlessly rolling on the floor next to his toys, never touching or engaging with them even with parental guidance. At our first appointment with a doctor who didn't dismiss these issues — just a few weeks before his Major Motrin Meltdown of 2009 — she watched him for two minutes and declared he needed to be evaluated immediately.

The weirdest symptom, however, was how he flipped a switch on his formerly diverse diet. One day he literally stopped eating almost everything. No more avocados or black beans, no more spaghetti or strawberries. Over the course of the next year, Jacob limited his diet to oatmeal, bananas, apples, chicken nuggets, and pizza. Period. Our close friends kept a ready supply of single-serve DiGiorno pizzas in their freezer for him, and friends who weren't so close were offended when we arrived with his cooler. "You don't think we can feed you guys properly?" they asked. "What kind of kid doesn't like chocolate chip pancakes?"

This finickiness was paired with what seemed to be an irrational fear of just being presented with a new food. Tantrums of face-melting proportions often accompanied mealtimes and we often didn't know when a food made an exit until we spent two hours peeling Jacob off the ceiling. This was the super-fun process we were enduring when I had to figure out how to get his fever down. So what did we do? We crushed up chewable Motrin and poured it into his mouth so that it would stick to his cheeks. His fever came down within an hour. This is how Jacob took medicine until he was 6 years old. It was one awful thing in a mountain of awful things he dealt with at that age.

Once it got to the point where his baby sister was afraid of his meltdowns, giving in to his dietary demands seemed like a no-brainer.

When he was finally able to communicate, we were perfectly happy to prepare whatever meal he wanted to avoid the drama. Food was one predictable problem out of many unpredictable ones that we could easily solve. Once it got to the point where his baby sister was afraid of his meltdowns, giving in to his dietary demands seemed like a no-brainer.

Jacob soon had a team of therapists and doctors to help him along and thankfully, they were more focused on other aspects of Jacob's diagnosis and were happy as long as he was growing. I wasn't, however, and while they picked through the sensory and anxiety and learning issues, I spent precious hours of my life making brownies with beet purée or seeking out nutritional supplements to make up the difference. I churned out popsicles, smoothies, cauliflower pizza crust, zoodles and more, sweet talking him every time I presented something new and promising him anything he wanted if he took a bite. He rejected all of it, every time. Forcefully. Then I'd give it to his sister and throw some nuggets in the oven.

These days, we really don't control what he eats because whatever he puts in his mouth provides calories that wouldn't be there otherwise. He routinely returns from school with a totally full lunchbox and eats the smallest portions of food possible at dinner. And why argue about it now? Meltdowns are not really a part of our lives anymore, and I'm not really looking for an opportunity to reintroduce them. Trying an unfamiliar food or eating just a few nutritional bites each day is a huge victory for Jacob, and he's already surpassing me in height. He's growing up just fine, even better than we hoped when we got his diagnosis, and prescription vitamins have relieved a lot of our anxiety over his diet. So instead of agonizing over his fiber intake, we'll focus our attention on the obstacles we can help him with instead.

More Like This
Can Elderberry Help Prevent Illness In Kids? Doctors Weigh In
What Is RSV?
16 After-School Snacks For Hangry Kids
Baby-Led Weaning: A Comprehensive Guide To Introducing Solids