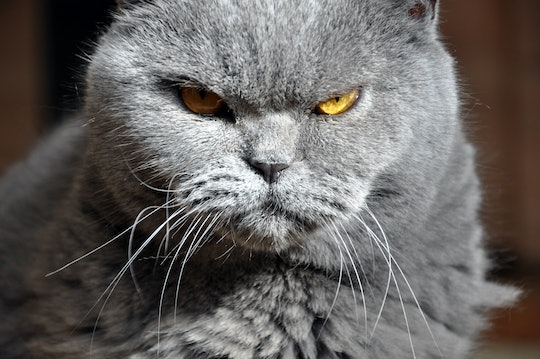 Feeling Grumpy Can Actually Be Good For Your Mind, According To New Research

If you're a generally moody person, it may be a good idea to start trying to be productive when you're feeling especially moody. I know, I know, that doesn't sound like it makes any sense. But, according to a new study, feeling grumpy can actually be good for your mind in some ways.

A new study published in the journal Personality and Individual Differences and conducted by the University of Waterloo studied 96 college students to see how mood might affect "executive function," as Big Think reported. Executive function is "a set of mental skills that help you get things done," including time management, paying attention, switching focus, organizing, remembering details, and multitasking, according to WebMD.

For the study, each subject took a series of tests to analyze their memory and reaction time, according to Big Think. They also each took a series of questionnaires to determine two things: their current mood that day, and their personality type. Personality types were either high-reactive or low-reactive, which are two opposing temperaments that affect personality type, according to developmental psychologist Jerome Kagan, and reported by The Harvard Gazette. Kagan has spent decades testing the principle on hundreds of babies, and he determined that babies' temperaments often carry over to their adult personalities.

Additionally, the study concludes that people's emotional temperament is a huge factor in how they function in their day-to-day lives. The study's abstract concludes:

An implication of this work is that emotional reactivity is an important factor in understanding how affective experiences influence executive skills and, by extension, everyday function.

Tara McAuley, a University of Waterloo psychology professor and co-author of the study, wants to be clear — these results do not mean that high-reactive individuals should encourage themselves to have mood swings. She said, according to Medical Xpress:

People shouldn't interpret the results as saying it's fine to fly off the handle or overreact, or to be grouchy ... We know that emotional reactivity differs from person to person starting at a very early age and that these individual differences have implications for mental health later in development.

In that case, what can we do with this information? Basically, it means that we function better when we are in circumstances we are comfortable with. So, let's say, if your child is a high-reactive person, next time they are feeling particularly set off and moody, maybe that's a good time to finally task them with folding that overflowing pile of laundry in their room. And if your child is a low-reactive person, next time something awesome happens that puts them in a super good mood, perhaps it would be a good time to have them sit down and do their homework.

If you're still wondering how all this could possibly make sense, Big Think referenced a 2013 paper written by Adele Diamond of the University of British Columbia and BC Children’s Hospital. In her paper, published by the National Center for Biotechnology Information, she wrote:

Essentially, humans generally do not like change, and people function better when things are the way they normally are. Honestly, glad science is backing me up on this one.