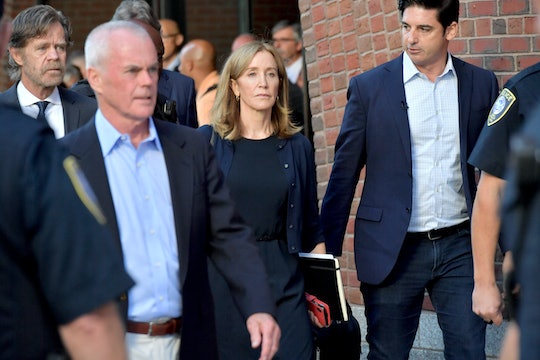 A long-awaited development in the college admissions scandal that rocked the nation earlier this year was revealed today. On Friday, Sept. 13, actress Felicity Huffman was sentenced to two weeks in prison for her involvement in the college admissions scandal, which many on Twitter are calling a slap on the wrist while pointing out racism within the U.S. justice system.

Huffman received as 14-day prison sentence, $30,000 fine, and 250 hours of community service after admitting to paying $15,000 to a college consultant "to inflate her daughter’s SAT score," The New York Times reported. In comparison to the stories of several black mothers who've been convicted of school enrollment, education-related crimes, Huffman's sentencing is lenient, something Twitter promptly pointed out as an example of white privilege.

The stories of mothers Kelley Williams-Bolar and Tanya McDowell resurfaced after an FBI investigation, nicknamed Varsity Blues, revealed that dozens of wealthy parents, including Huffman as well as actress Lori Loughlin, were allegedly involved in "a nationwide conspiracy that facilitated cheating on college entrance exams and the admission of students to elite universities," according to documents from the United States Department of Justice.

In 2011, single mom Williams-Bolar, was convicted for "falsifying her address to get her kids into better public schools," according to The Atlantic. The Ohio mother was sentenced to 10 days in jail, three years of probation, and community service, ABC News reported at the time. Williams-Bolar was living in public housing and her home had been broken into, according to ABC News, and she had said her actions were made because she wanted to keep her family safe: "I felt it was my duty to do something else."

McDowell received a much harsher punishment. In 2012, McDowell pleaded guilty to "charges of first-degree larceny and conspiracy to commit first-degree larceny for illegally enrolling her 6-year-old son" in a public school district in Norwalk, Connecticut, they did not live in, The Connecticut Post reported. McDowell, homeless and unemployed at the time, was accused of stealing $15,000 for the cost of her son's education, NBC News reported. For the offenses she pleaded guilty to regarding her son's school enrollment, McDowell was ultimately sentenced to five years in prison, according to Salon. McDowell was also charged in a narcotics case after she was caught selling drugs an undercover police officer, an offense she said she regretted.

"Who would have thought that wanting a good education for my son would put me in this predicament?" McDowell said at her sentencing, according to The Connecticut Post. "I have no regrets seeking a better education for him, I do regret my participation in this drug case."

Another wrote on Twitter, "... if Felicity Huffman was a Black woman with no prior Police Record, she would have been sentence to more than months in prison for paying her daughter's entry into college.! Judicial System is corrupted with 'Privilege Selectivity.'"

"Felicity Huffman paid $15,000 for a better score on her daughter's SAT so she could get into USC - Tonya McDowell used her babysitter's address to get her son into a better kindergarten - Huffman was sentenced to 14 DAYS in prison, McDowell got 5 YEARS - this's why we kneel," another said.

One more said, "Tanya McDowell serving 12 years for sending her child to school in a better district and Felicity Huffman getting 14 days for scamming a university is proof the justice system works for the people it's designed to work for."

Systemic racism is real and desperately needs to be addressed and fixed. It has a ripple effect of consequences that shouldn't have ever been a reality, but certainly not in 2019. Calling it out when you see it is a good place to start, but now that Huffman's case has pushed this issue into the spotlight, it's important to ensure that action to combat it is happening within our communities and from our policymakers.

More Like This
Teachers Reveal The Go-To Movies They Love To Show In School & Why
New York Can End Religious Exemptions to Vaccine Mandates, Says A Federal Appeals Court
Angelina Jolie Reveals That Daughter Zahara Is Headed to Spelman College
Can We Fix The One Big Problem With The PTA?