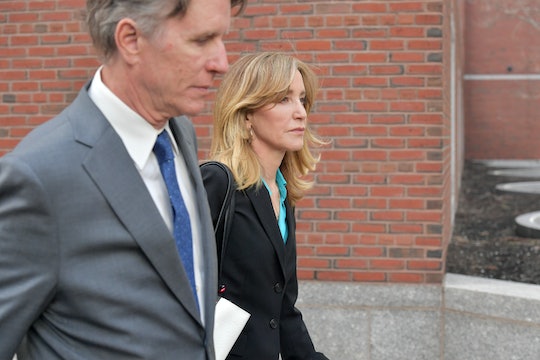 Felicity Huffman Has Been Sentenced In The College Admissions Scandal

Actress Felicity Huffman pleaded guilty to charges of conspiracy and fraud in March, after an FBI investigation revealed she had paid $15,000 to boost her daughter's SAT score to get her into college. On Friday, Sept. 13, Felicity Huffman's sentence in the college admissions scandal was dealt by a judge in Boston, sentencing her to 14 days in jail as well as significant fine. She will also have to complete community service hours and complete one year of supervised release once she is out of jail, CBS News reported.

Romper's request for comment regarding the sentencing from Huffman's team was not immediately returned. On Friday, Huffman reportedly addressed the courtroom before her sentencing where she told the judge how deeply sorry she was to the people affected by her actions, including her family members. "I have betrayed them," Huffman said, according to BuzzFeed News.

"I was frightened, I was stupid, and I was so wrong," she added. "I am deeply ashamed of what I've done."

Now that Huffman has received her sentence, she will have until Oct. 25 to turn herself in to begin her two week jail sentence, according to TMZ. She is also the first parent from the case to be sentenced, according to BuzzFeed News.

In March, Huffman was exposed as a player in a nation wide college admissions scandal, which the FBI labeled "Operation Varsity Blues". Huffman, as well as other high profile parents, were charged for their "involvement in a bribery and cheating scheme" to allegedly get children into top colleges, according to New York Magazine. As previously stated, Huffman pleaded guilty to charges of "conspiring to commit mail fraud and honest service mail fraud", as well as admitting to paying money to altering her daughter's SAT scores, according to ABC News.

Huffman told ABC News in a statement after the sentencing that there are "no excuses" for her actions. "I accept the court's decision today without reservation. I have always been prepared to accept whatever punishment Judge Talwani imposed. I broke the law. I have admitted that and pleaded guilty to this crime. There are no excuses or justifications for my actions. Period."

"I would like to apologize again to my daughter, my husband, my family, and the educational community for my actions," she added. "And I especially want to apologize to the students who work hard every day to get into college, and to their parents who make tremendous sacrifices supporting their children."

Huffman's oldest daughter, Sofia, was reportedly upset wth her once the scandal became public, according to CNN. In the courtroom on Friday, Huffman recalled a conversation she had with her daughter after she had been charged. Huffman said that her daughter told her, "I don't know who you are anymore mom? Why didn't you think I could do it on my own?" Sofia also reportedly had no knowledge of her mom's intervention with her SAT scores, according to NBC News.

Huffman has a little more than a month to report to officially begin her time in jail. And after that happens, Huffman told ABC News in a statement that she is looking forward to helping others. "I look forward to doing my community service hours and making a positive impact on my community. I also plan to continue making contributions wherever I can well after those service hours are completed. I can promise you that in the months and years to come that I will try and live a more honest life, serve as a better role model for my daughters and family, and continue to contribute my time and energies wherever I am needed."