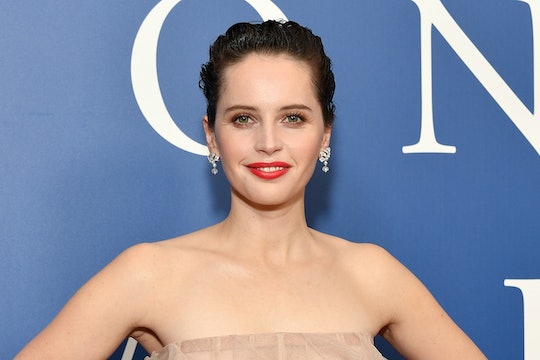 Pretty much any supporter of Supreme Court Justice Ruth Bader Ginsburg would be excited to meet her — but if you were playing her in a biopic about her life, you'd probably be just a little more excited than the average fan. Actress Felicity Jones, who plays RBG in the movie On the Basis of Sex, recently had that experience. According to a new interview, Felicity Jones fangirled at dinner with Ruth Bader Ginsburg — and the entire interaction sounds pretty fantastic.

As Jones told Us Weekly, she got to go out to dinner with Ginsburg in December. Jones recalled that she was "insanely nervous" to hang out with the woman she was playing on-screen, and that she "felt like I wanted to curtsy" upon meeting RBG. But luckily, Ginsburg immediately put Jones at ease. “Ruth was incredibly welcoming. We went to her office first and it felt like a very warm environment — covered in photographs of friends and family and all sorts of mementos that had been sent to her by her fans,” Jones also told Us Weekly. “She doesn’t take her position or her fame lightly. She has a great humanity. We all trust that she’ll always do the right thing.”

This was not the first time Jones and RBG met. In August 2017, Jones, Ginsburg, director Mimi Leder, and Armie Hammer (who plays Ginsburg's late husband Marty) all went out to dinner together in Washington, D.C.,Vanity Fair reported. Leder told Vanity Fair that when Jones went to the restroom towards the end of the meal, Ginsburg told Leder that Jones was “great,” but wanted to know if she could do a Brooklyn accent. Oh, Ruth.

In her Us Weekly interview, Jones mentioned that she asked the justice if she had any advice regarding her playing Ginsburg on screen. "She simply said, 'I’ve seen your work, I know you can do it,'" Jones told Us Weekly, adding that the advice gave her "enormous confidence." (It's unclear if this was at the recent dinner, which took place after filming had wrapped, or during the August 2017 dinner.)

Jones has opened up about getting to play Ginsburg in On the Basis of Sex on several occasions. In December, she told The Hollywood Reporter why she has so much respect for RBG: "Justice Ginsburg managed to completely change the system, and she did it through her hard work, her determination, her beliefs and her integrity, so I have enormous respect for her on every level."

And that immense respect helped Jones fuel her commitment to capturing Ginsburg's likeness on film. As Variety reported, Jones, who has a British accent in real life, only spoke in Ginsburg's Brooklyn dialect while on the film's set. "I was full Ruth Bader Ginsburg," she said, as per Variety. As Vanity Fair added, Jones even wore gray color contacts and capped teeth to better embody the justice.

It's clear that Jones is a huge fan of Ginsburg, and that she did not take the responsibility of portraying her lightly. Because of that, the fangirling almost seems all but inevitable.

On the Basis of Sex is now playing in limited theaters, but will be more broadly released on Friday, Jan. 11.