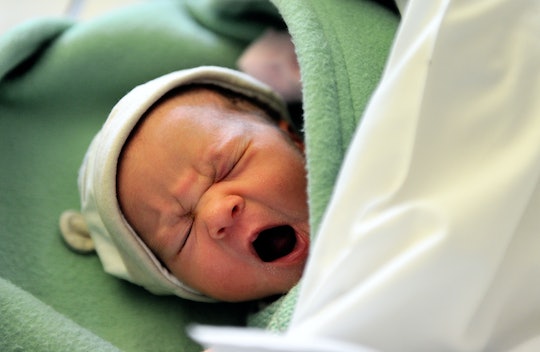 Gender stereotyping happens every day, and I'm sick of it. Between people telling a person to smile on the streets or the cat calls I hear from windows daily, it isn't fun and it isn't fair. In case you weren't already upset about gender stereotyping in everyday encounters, there is a reason to be even more upset. A recent study has found that female babies cries are discounted more. What?

That means that the gender stereotyping that those who identify as female face every day happens as early as day one. I know, it's insane. According to a new study done by the University of Essex, people begin to stereotype babies as a result of their gender starting as early as three months old.

How? Well, the study concludes that adults source the degrees of femininity and masculinity to babies based on the pitch of their cries. So, if a cry was louder and higher pitched, the participants in the study attributed those cries to females. If the cry was low-pitch, it was attributed to masculinity and therefore identified as belonging to a male baby. Dr. David Reby, who works at the school of psychology at the University of Sussex, said in a press release:

It is intriguing that gender stereotyping can start as young as three months, with adults attributing the degrees of femininity and masculinity to babies based on the pitch of their cries. ... Adults who are told, or already know, that a baby with a high-pitched cry is a boy said they thought he was less masculine than average. And baby girls with low pitched voices are perceived as less feminine.

This, of course, brings up many different stereotypes. One is that females "naturally" have higher-pitched voices from birth (they sound "more whiney" than men) and another is that the needs of females aren't of higher priority because they're "dramatic," whereas males' cries are not — simply because they are males. The study found that men assume male babies are more stressed than female babies, even when both were crying at the same pitch, therefore making the cries of females discounted and further enforcing gender stereotypes.

As for the pitch of voices? As it turns out, there is no actual difference in pitch between males and females until puberty. Therefore any assumption made about a person's sex depending on the sound of their voice is just a conspiracy.

What was the conclusion that the researchers came to in their study? They found that the gender biases in the caregivers responses to the babies may have implications about the immediate welfare of children and the development of their gender identities over time.

"While such effects are obviously hypothetical, parents and care-givers should be made aware of how these biases can affect how they assess the level of discomfort based on the cry alone," Reby said.

The bottom line is, gender biases do start pretty early, and if your baby, or the baby you're watching is crying, don't chalk it up to their gender. All babies need their stresses addressed with care regardless of gender or pitch of their voice.

More Like This
What Is Monkeypox & Should You Be Worried? Here’s What You Need To Know
Two Young Children Have Been Hospitalized Because Their Formula Is Out Of Stock
10 Ways ‘Workin' Moms’ Is Basically A Crash Course In Parenting
10 Of Céline Dion's Best Quotes on Motherhood