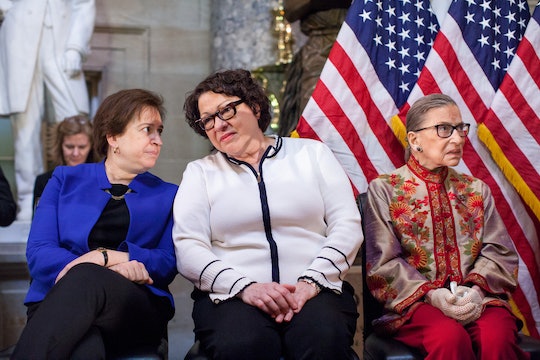 You’d think mansplaining and manterrupting would kindly check itself at the doors of the U.S. Supreme Court. But sadly, to no one’s surprise, a new study has proven that female justices are interrupted more than their male colleagues, even though they hold, or have held, one of the most respected and powerful positions in the country. Researchers examined interruptions among male and female justices during Supreme Court oral arguments and found that the four women who have had a seat on the bench — out of 112 justices in history — were interrupted on average three times more often than each of her male counterparts.

Tonja Jacobi and Dylan Schweers from the Pritzker School of Law at Northwestern University published their findings in a 77-page paper last month, aiming to find the effects that gender, ideology, and seniority have within the Supreme Court — and whether the justice being a man or woman played an important role in this power dynamic.

"Our new research shows that even when women become justices of the Supreme Court, they are given less respect than the male justices give one another, and receive less deference from male advocates," the duo wrote in a summary for SCOTUS blog. "It shows that women still do not have an equal opportunity to be heard on the highest court in the land. In fact, as more women join the court, the reaction of the male justices and the male advocates has been to increase their interruptions of the female justices."

According to the study, over the last 12 years women have accounted for 24 percent of the bench on average, and while 32 percent of all interruptions were of women, only 4 percent were made by women. "That means each woman was interrupted on average three times more often than each of her male colleagues," the authors wrote.

The researchers also noted that the female justices had a tendency to introduce their questions politely with phrases like "may I ask," "excuse me," or "sorry." But over time, they found that the women gradually learned to set aside such politeness and speak like their male counterparts, although they are still generally interrupted more than men.

As the authors noted, these interruptions go "beyond simple rudeness" because these oral arguments are crucial to the outcomes out the cases they're deciding.

"This pattern of gender disparity in interruptions could create a marked difference in the relative degree of influence between the male and female justices," they wrote. "When a justice is interrupted, her point is left unaddressed, and her ability to influence the outcome of a case or the framing of another justice’s reasoning is undermined."

While there has been progress toward gender equality in the male-dominated judicial branch, these findings are certainly infuriating. With these frequent and undermining interruptions, women's representation is still lacking. But knowledge is power, and, with solid research to back it up, the interactions (and interruptions) between both genders in the nation’s highest court will hopefully balance out one day.

More Like This
13 Moving Photos Of Kids, Families, & More Protesting Abortion Rights Across The Country
MGK Shared An Emotional Tweet After Dedicating Song To “Wife” & “Unborn Child”
Diddy's Kids Are All Grown Up & Showed Up In Style To Support Their Dad
Bridgerton Season 3 Will Focus On Fan Favorites Penelope & Colin