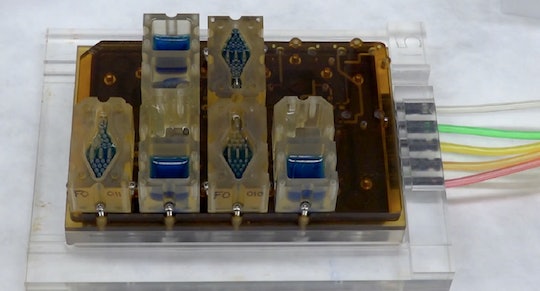 Unfortunately, the issue of women's pain not being taken seriously by doctors isn't anything new. For years, centuries even, women have been battling with serious health issues, while others simply brushed it off as women being the weaker sex (eye roll). However, a recent discovery may mean their health might start to get the attention it deserves. A new female reproductive device could help scientists understand the effects drugs have on women and their bodies, rather than having to rely on data retrieved from tests run on their male counterparts, and could lead scientists to understand female biology that much better.

The device, described as "a microfluidic culture model of the human reproductive tract and 28-day menstrual cycle," was developed by a team of researchers, engineers, and scientists, who created the device from actual human tissue — specifically, human tissue from the reproductive system of women who had previously donated their bodies to science. Nicknamed EVATAR, the device has already gone so far as to imitate a female reproductive cycle, even creating an egg at the end of it. Basically, EVATAR enables scientists to actually see what happens to a women's reproductive organs when exposed to different kinds of medications, as well as try to understand what causes some of the more common issues that affect women.

While the device is still new, researchers say they hope to one day create more complex systems using the stem cells of individual women, "to test the safety and effectiveness of new drugs for that individual."

EVATAR was created with the intention on working to help women fighting such diseases as "fibroids and endometriosis to infertility, miscarriages and gynecologic cancers."

And while the discovery is technically only a "synthetic version of the female reproductive tract," it still serves an important purpose in that it's working to better understand women's health. In fact, the concept of EVATAR in and of itself is a step forward for women's health (a male version of the device has not yet been developed).

Obviously, the creation of EVATAR also carries with it infinite possibilities, including the creation of a human baby outside a human womb. Which would, in turn, set the scene for moral issues. Speaking to NPR, Insoo Hyun, a bioethicist at Case Western Reserve University, said:

If, hypothetically, you can fertilize an egg outside a body and carry it all the way to term outside the body, then who's responsible for this baby now?

However, such progress is far into the future, and not exactly something to worry about right now. Right now, EVATAR has the power to take women's health issues and put them in the spotlight, and that's what's important.