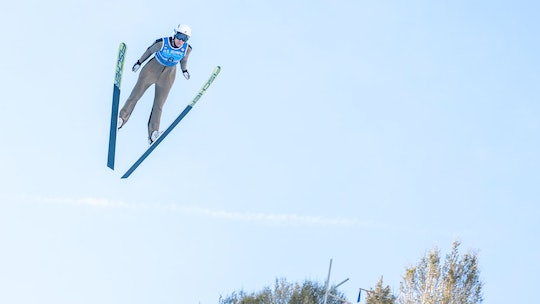 Nevertheless, They Persisted: The Story Of How Women Got To Compete In Ski-Jumping

"Ski jumping is one of the most unique feelings," Ringquist tells Romper from PyeongChang, in an email interview. "I have a hard time comparing it to anything else. It's the feeling of weightlessness and time slows down, as you fight to stay as far away from the Earth for as long as you can."

When Ringquist was 12 years old, the Olympics came to Park City, UT, and she was utterly thrilled. Her older brother, Blake, was selected to test-jump the hill ahead of the Olympian ski jumpers. "I was so jealous of him because he got to be at the top of the hill with all of my idols," Ringquist explains. "I wasn’t even aware at the time that I was solely looking up to men."

No women ski jumpers pursued their Olympic dreams in Park City in 2002 — or in the next Olympics at Turin, or in the Olympics after that. In fact, women were barred from competing until 2014, though men had been ski jumping in the games since 1924.

By 2005, of course, science had pretty much definitively proven that uteruses weren't made of glass.

Next Monday, female ski jumpers will compete in the 2018 PyeongChang Olympics for only the second time in 90 years of history. It will be Ringquist's first games — she couldn't attend the 2014 Winter Games in Sochi due to a disqualification. "I really couldn’t be more excited, and I can’t believe my dream is coming true," she says.

Ringquist remembers watching the 2006 Turin Olympics on television from a small common room in Germany, where she'd been competing with other top-tier women's ski jumpers. A thousand miles from the most vaunted sporting event in the world, her older teammates began to cry at the sight of the opening ceremonies. Ringquist suddenly realized something was terribly wrong. As elite ski jumpers, why weren't they competing at the greatest international competition there is?

"I have heard a lot of 'no’s' throughout my 21-year-long career as a ski jumper," Ringquist says. One of the biggest was her exclusion from the 2006 and 2010 Olympics. Her heart broke for herself, and for the other young women who had worked so hard to reach the pinnacle of their field, only to hit a seemingly impassable barrier. Despite the fact that women excel at ski jumping, the International Olympic Committee (IOC) would only let them go so far.

"Ski jumping is a sport that favors the lighter athlete, and women are just naturally lighter," Jill Jaracz, co-host of the podcast Olympic Fever, tells Romper. Ski jumping relies more on skill than strength, and distance is often a question of timing, technique, and focus. When it comes to their ability to fly, women might even have an advantage over men. So why exclude them?

In a word: uteruses. Ski jumping “seems not to be appropriate for ladies from a medical point of view," explained International Ski Federation President Gian Franco Kasper in 2005, as Time Magazine reported. He was apparently referring to 19th century notions of uterine displacement, or the "wandering womb." Though false, it wasn't the first time this theory of female delicacy had been used to keep women out of sports. "I remember in 1984, when women got to do the marathon for the first time, it was like, who knew what would fall out after 26.2 miles?" Jaracz says.

By 2005, of course, science had pretty much definitively proven that uteruses weren't made of glass. In 2002, the IOC Medical Commission even issued a statement to that effect: “The female reproductive organs are better protected from serious athletic injury than the male organs," they wrote. "Serious sports injuries to the uterus or ovaries are extremely rare." The real reason behind the IOC's discrimination ran much deeper.

Abby Ringquist, along with women jumpers from all over the world, fought hard for her future. For ten years, they lobbied, raised money, and competed as often as they were able in hopes of proving their mettle to the IOC. (Their determination in the face of unrelenting disappointment was documented in the excellent film, Ready To Fly.) When traditional advocacy failed, they filed a discrimination lawsuit in Canada, on the eve of the Vancouver Olympics. As The Washington Post reported, supporters and fans packed the 7,500 seat courtroom.

The IOC refused to budge. They did, however, change tactics. "One of the IOC’s arguments has always been, well, there’s just not enough women in the sport," says Jaracz. "But that’s not true anymore." And according to authors Patricia Vertinsky, Shannon Jette, and Annette Hofmann, the Committee had no problem admitting sports with far fewer atheltes — like bobsledding and the snowboard cross.

Meanwhile, before the 2010 Winter Games, ski jumper Lindsey Van held the distance record for both men and women on the Vancouver Olympic hill. Mind-bogglingly, the IOC still refused to admit that women were worthy of an Olympic spotlight.

For Jaracz, the IOC's bizarre intransigence comes down to institutionalized sexism — and just maybe, the fact that at this one event, women could potentially outperform men. In a 2013 interview with The New York Times Magazine, Lindsey Van agreed. "If women can jump as far as men, what does that do for the extreme value of this sport?" She asked. "I think we scared the ski-jumping [establishment]."

Unfortunately, the battle for equality isn't over. Women jumpers are still only allowed to participate in one event — the normal hill — while men participate in three.

Despite their disappointment in 2010, women jumpers kept pushing. In 2011, the IOC finally caved: women would compete in Sochi. But not everyone was happy with the decision.

"If a man gets a serious injury, it's still not fatal, but for women it could end much more seriously," said Russian ski jumping coach Alexander Arefyev in 2014, as Buzzfeed reported. "Women have another purpose — to have children, to do housework, to create hearth and home."

A month after Arefyvev laid bare this deep and sexist vein, American Sarah Hendrickson became the first woman in history to ski jump at the Olympics (while bravely ignoring the laundry back home). At the risk of sounding corny, it was one small step for woman, and one giant leap for womankind.

Unfortunately, the battle for equality isn't over. Women jumpers are still only allowed to participate in one event — the normal hill — while men participate in three, including a larger hill — the K-120, on which female ski jumpers often train. Jaracz thinks that more media coverage of women's ski jumping could help them clear this hurdle, as could the continued hard work of vocal advocates.

Ringquist, for one, plans to continue guarding the flame. Besides competing in PyeongChang on Monday, February 12, she's working with the 1000 Dreams Fund to raise awareness about the lack of funding for female athletes.

"Ultimately, another dream of mine is to have kids, and for my kids to share with their friends that their mom is an Olympian, and hopefully inspire them and their friends to have big dreams and to play sports too," she says.

There's little doubt that for her daughters, and for other young girls with aerial dreams, Ringquist will be the Olympic role model she never had.

More Like This
How Title IX Changed The World For Girls
How Do I Rediscover My Sexuality When I’m Completely Touched Out?
The Euphoric Terror Of Rollerskating Was Exactly What I Needed
Can The Baby Have That?