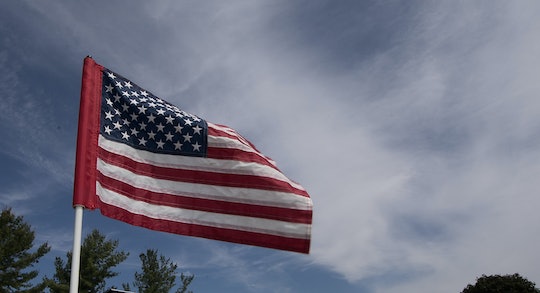 And today in Ugh: Small-minded, sexist jerk edition: While running errands in Concord, North Carolina, this week, a female army veteran received a nasty note on her car blaming her for parking in a veteran parking spot. Rebecca Landis Hayes served as a physician in the United States Navy for eight years, but upon returning to her car, which she'd rightfully parked in a spot reserved for veterans like herself in a grocery store lot, she found an absolutely ridiculous, handwritten note taped to her windshield: "This parking spot is for veterans, lady," it read. "Learn to read & have some respect."

Have some RESPECT? Since Hayes shared what happened — and her perfect response to it – on Facebook, that's what pretty much every person who's heard about this wants to tell the dimwit who wrote this. Except no one knows who that person is, because, predictably, the notes wasn't signed.

Regardless, Hayes responded to him or her in an open forum, and made the note public as well (so, if any of you North Carolinians recognize this handwriting, give 'em hell... and a lesson on gender equality). "I know I parked in one of the Veteran Parking spaces today," she wrote on Facebook. " It was the first time, and I won’t do it again. I’m sorry…"

Obviously, though, Hayes has no reason to be sorry, and she knows it. It's hard to imagine the level of ignorance — not to mention some probably very deep-seated sexism — a person would have to have to assume that because a woman is dressed as a civilian, there's no possible way that she's a veteran. To think, in the year 2016, that the term "female veteran" is an oxymoron, and that any woman claiming a small perk afforded to veterans for their service in protecting our freedom and safety must be nothing more than an imposter. That the only people strong or smart enough to be veterans are men.

It's offensive to say the least, and Hayes rightfully ripped into the anonymous note-writer in her Facebook post:

I’m sorry that you can’t see my eight years of service in the United Sates Navy. I’m sorry that your narrow misogynistic world view can’t conceive of the fact that there are female Veterans. I’m sorry that I have to explain myself to people like you. Mostly, I’m sorry that we didn’t get a chance to have this conversation face to face, and that you didn’t have the integrity and intestinal fortitude to identify yourself, qualities the military emphasizes.

Which leads to one question, I served, did you?

Perhaps the most frustrating part is that it's true that this was the first time Hayes had used a parking spot reserved for veterans — simply because she did not want to "explain or justify my being a veteran," she told The Huffington Post. By contrast, her husband, who is also a veteran, uses these spots all the time, and the only times anyone ever says anything about it is to thank him for his service.

And that's great for her husband, and for all men whose accomplishments and contributions go unquestioned. We certainly should express gratitude for our veterans, all of them. To make that even simpler, women are gaining equality in the military, because a lot of us are pretty badass: In August, Capt. Kristen Griest and 1st Lt. Shaye Haver completed the Army's physically and mentally grueling Ranger School, becoming the first women ever to do so. As of December, all frontline combat jobs are open to women, and just this week the U.S. Senate voted to require women to register for the draft.

Although the draft bill has a long way to go before becoming law, the sentiment is clear: women are just as capable and valuable as men. They've contributed to military operations in ever-increasing roles and deserve the same esteem so easily bestowed to men who return from duty. Now that the story has hit the news, the note-writer probably feels pretty crummy (good!), but this incident underscores the fact that sexism is pervasive in our communities. It's unproductive, it's wrong, and it heinously challenges women's worth in the world. Hayes served to make our country a better, freer, safer, more equitable place for all of us. What does sexism accomplish?