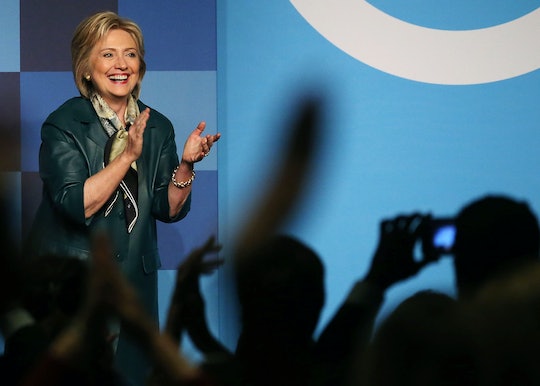 This year’s Democratic National Convention has already made history by nominating Hillary Clinton at the party’s presidential nominee, breaking the glass ceiling and marking the first woman ever to head a major party ticket. On Thursday night, Clinton will finally take the stage and address her fellow Democrats and these many feminist DNC tweets prove exactly why this night is so historic not only for American politics, but for so many issues facing the nation’s future.

During one historic moment from the Democratic convention, following a video montage showing the faces of all 44 male American presidents, glass then shattered on the screen to reveal Clinton’s face. After a strong applause broke out in the crowds, Clinton addressed the DNC audience in a surprise satellite appearance.

"What an incredible honor that you have given me, and I can't believe we just put the biggest crack in that glass ceiling yet," Clinton said on Tuesday evening. “Thanks to you and to everyone who has fought so hard to make this possible.

"And if there are any little girls out there who stayed up late to watch, let me just say, I may become the first woman president, but one of you is next," Clinton said in the unannounced appearance.

That striking image was just one example that illustrates just how historic this year's election truly is and these tweets prove exactly why Clinton's nomination is so historic:

Even on the first night of the convention, women were given another reason to celebrate this memorable moment when first lady Michelle Obama delivered a rousing speech that shut down archaic sexist criticism of Clinton, spun them around, and then proved why Clinton's political career and her experience as a mother and a grandmother are the perfect qualifications for her to be the next president.

"I watch my daughters, two beautiful, intelligent, black young women playing with their dogs on the White House lawn," the first lady said during her DNC speech, "And because of Hillary Clinton, my daughters and all our sons and daughters now take for granted that a woman can be president of the United States."

Clinton has been in the public eye for decades, proving time and again a remarkable resilience to adversities that face women on a male-dominated path.

"Whether I am meant to or not, I challenge assumptions about women," Clinton once said in 2009. "I do make some people uncomfortable, which I’m well aware of, but that’s just part of coming to grips with what I believe is still one of the most important pieces of unfinished business in human history — empowering women to be able to stand up for themselves."

As a first lady, senator, secretary of state and now the Democratic presidential nominee, Clinton has shattered what had been a very high glass ceiling for women in politics. But, this defining night will some day make historic moments like these for fellow women, simply, just moments.