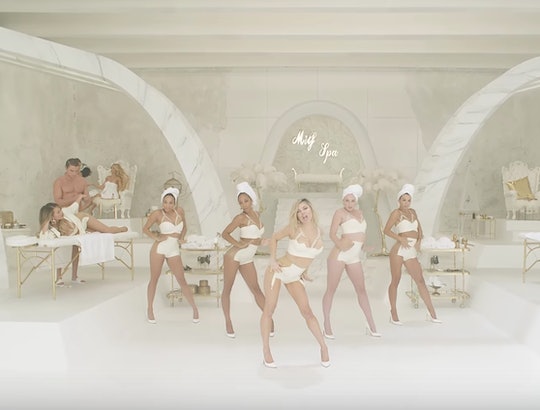 Fergie is back and there is no stopping her this time. The "Fergalicious" singer is back with a new music video and song that is both visually stunning and amazing — with a killer message to add to it. Fergie's new video features Chrissy Teigen breastfeeding and other shoutouts to moms making it one of the best music videos of 2016 and maybe even the decade.

There is so much to be said about this new music video, it is hard to find a place to begin. From the celebrity cameos, to the amazing costumes, to Fergie herself — I could go on for days. But lets start out with the message of the music video; one that could be empowering to moms everywhere.

The music video includes super models Alessandra Ambrosio who is mother to children Anja and Noah and Devon Aoki who is mom to James and Alessandra. Then there is Amber Valetta who is a mom to teenaged son, Angela Lindvall who has two sons of her own, and Gemma Ward who has one daughter named Naia. There is no doubt that all of these women are super models and super mothers, as they are definitely making that M.I.L.F. money daily.

Then there is Ciara, who is mother to son Future Zahir, and of course, the woman who needs no explaining, Kim Kardashian who is mom to daughter North and Saint West.

Perhaps the greatest thing about the music video is its message and what it stands for. These celebrity moms are not afraid of getting what they want and being in the spotlight. They're proud of making their money and proud to be women. It is so completely refreshing to see women both being and enjoying themselves. And it is so refreshing to see that being promoted in the mainstream media.

I am so excited for Fergie's comeback — and if this music video is any indication of what she is capable of, I am so ready to see more.