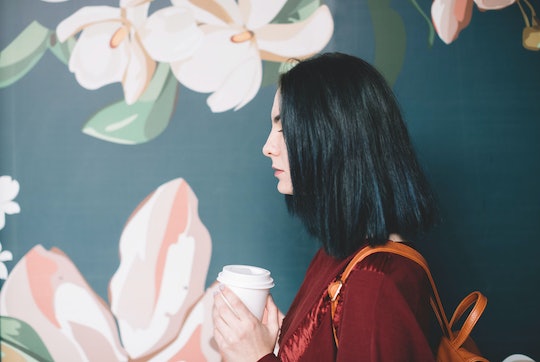 I still have my discharge paperwork from my third miscarriage. Filed away in a drawer in my kitchen, it marks a — thankfully — very brief visit to a local emergency room for excessive bleeding and pain. Listed as the diagnoses are the words "spontaneous abortion": the medically accurate term for my body emptying the contents of my uterus against my will. And on May 7, Georgia Governor Brian Kemp signed an anti-abortion "fetal heartbeat" bill that would make it possible for people like me to go to prison.

HB-481 effectively bans abortion past six weeks gestation — a point by which few people even know they're pregnant. As soon as a doctor can detect "embryonic or fetal cardiac activity," it will be illegal for that provider to perform an abortion or for the pregnant person to seek abortion services, according to Slate. The bill also categorizes embryos and fetuses as "a class of living, distinct persons," granting them personhood inside a pregnant person's body. That categorization effectively criminalizes abortion, and allows the state to prosecute pregnant people who terminate their own pregnancies or seek out an illegal abortion from a provider.

Slate writer Mark Joseph Stern also argues it would leave a pregnant person in Georgia who miscarries "liable for second-degree murder, punishable by 10 to 30 years' imprisonment."

In order to determine why a pregnant person suffered a pregnancy loss — and whether it was a result of their actions — prosecutors would be allowed to interrogate previously pregnant people experiencing miscarriages in order to determine their level of personal responsibility: "If they find evidence of culpability, they may charge, detain, and try these women for the death of their fetuses," wrote Stern.

Those of us who have experienced pregnancy loss at any time cannot help but ask ourselves why.

When I laid on a hospital bed in the middle of a bustling emergency room, bleeding on over-starched sheets as I filled out paperwork and begged for pain medication, any pain medication at all, I scoured my mind for some logical, tangible reason I had lost another pregnancy. Was it something I did? Was it something I ate? Did I walk too far from work to the train? Did it happen when I picked up my 4-year-old son? What did I do? Those of us who have experienced pregnancy loss at any time cannot help but ask ourselves why, and more often than not we're made to feel as if it was somehow our fault; a sign of a flawed body, or some intrinsic part of us lacking whatever the universe has decided a person needs to carry a pregnancy to term and become a parent.

And now Georgia has joined a growing list of states who want to not only blame pregnant people for their miscarriages, but jail them for it.

In 2019, Kentucky, Mississippi, and Ohio have passed similar laws, with the purpose of challenging Roe v Wade, the landmark Supreme Court decision that solidified abortion access as a constitutional right.

Rep. Terri Collins (R-AL), said in defense of her "Human Life Protection Act," a bill that would make it a crime for doctors to perform abortions at any stage of pregnancy, "This bill is simply about Roe v. Wade. The decision that was made back in 1973 would not be the same decision that was decided upon today if you re-looked at the issue." (In 2018 a NBC News and Wall Street Journal poll found that the majority of Americans support Roe v Wade and believe abortion should be available in all or most cases.)

"Heartbeat" laws are blatantly unconstitutional, and the representatives introducing and passing them are doing so knowing they will be legally challenged. Because they have been. Per The New York Times, similar laws have been found unconstitutional in Iowa and North Dakota, a judge blocked the so-called "heartbeat bill" in Kentucky, and a federal judge will hear a challenge to the law in Mississippi in June. Think of these bills as complicated chess moves in the game of women's reproductive rights.

But in the crosshairs of what is certainly going to be an ongoing legal battle are pregnant people simply trying to live their lives and navigate the various outcomes of gestation. That group includes people who didn't have a choice in whether or not they remained pregnant.

It's nearly impossible to distinguish an abortion form a miscarriage in a clinical setting, especially since 89 percent of abortions occur within the first 12 weeks of pregnancy and the majority of miscarriages occur in the first trimester. In fact, while it's believed that 10 to 20 percent of known pregnancies end in miscarriage, per the Mayo Clinic, that number is likely higher, since "many miscarriages occur so early in a pregnancy that a woman doesn't realize she's pregnant." So in order to criminalize those of us who have made the decision to no longer be pregnant, anti-abortion advocates are willing to criminalize the people who didn't have a choice, too.

And it wouldn't be the first time that was the case. "Women have been prosecuted and sometimes incarcerated for allegedly self-inducing an abortion in the United States," stated the American College of Obstetrics & Gynecology in a 2005 statement on the decriminalization of self-induced abortion.

In El Salvador, where abortion is illegal, 17 women have been jailed as a result of their miscarriages. "It's been 11 years already," a woman tells Now This. "Something happened to me so they took me to the hospital. All of a sudden, I woke up, I was handcuffed, and the doctor said I was detained for aggravated homicide."

That reality is exactly what anti-abortion activists like Catherine Davis are championing: a means to the end of the constitutional right to safe, legal, affordable abortion access. "This is a historic day for Georgia," Davis said at the signing ceremony for Georgia's "heartbeat" bill. "This is a day that many of us who have been in the pro-life fight for years and years and years didn't really think it would be possible."

Thinking back on the three miscarriages I have endured, the fetal loss at 19 weeks that I mourned, and the day I birthed a son that was alive and the remnants of a son that wasn't, I find it hard to think any of this is possible, too.

More Like This
22 Valentine's Day Pregnancy Announcement Ideas Sweeter Than Candy
Here's What Pregnant People Actually Want For Valentine's Day
Fun, Sexy Maternity Lingerie, For When The Mood Strikes
32 Zippy Girl Names That Start With “Z”
What Parents Are Talking About — Delivered Straight To Your Inbox