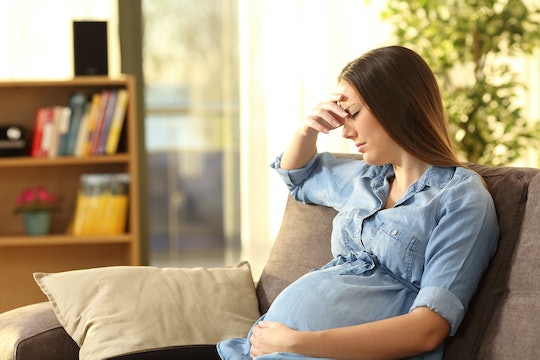 Pregnancy can be a nerve-wracking time if you're someone who tends to get sick often. Having to worry about your health and the well-being of your future child is a lot of pressure, and it can be stressful trying to figure out what medications are safe to take while pregnant. Although being sick while pregnant is not fun to think about, it's important parents stay informed about the risks of falling ill while pregnant, especially in light of a recent study that found fever during pregnancy can increase risk of birth defects.

Benner said of the relationship between temperature and neural crest cells, according to Duke Health:

We found that these neural crest cells contain temperature-sensitive ion channels that typically are found in your sensory neurons. They’re the channels that, when you stick your hand in a hot cup of water, tell your body the temperature has changed.

So, if a pregnant person comes down with a fever during the first trimester, there's a possibility that their baby's developing cells could be affected. Affected cells could possibly lead to a host of birth defects, like a cleft palate or a congenital heart issue, according to Neuroscience News.

This finding is a big deal for a lot of reasons, but especially because researchers have been debating the cause of birth defects for a while now. Prior to this study, many researchers believed an infection or virus during pregnancy to be the underlying cause of a majority of birth defects. Thanks to Benner and his team, however, researchers now have sufficient evidence to reason that fevers can jeopardize the development of a baby's heart and face. Benner explained, according to CNN:

... hyperthermia (fever) is important for the genesis of these serious birth defects.

Given the study's findings and the concerning statistics about birth defects, Benner is advising pregnant people to take common fever reducers like Tylenol if they develop a fever.

Benner said, according to Duke Health:

My hope is that right now, as women are planning to become pregnant and their doctors advise them to start taking prenatal vitamins and folic acid, their doctor also informs them if they get a fever, they should not hesitate to call and consider taking a fever reducer, specifically acetaminophen (Tylenol), which has been studied extensively and determined to be safe during the first trimester. While doctors advise most women to avoid any drug during pregnancy, there may be benefits to taking acetaminophen to reduce fever. Women should discuss all risks and benefits with their doctors.

Benner made an especially good point when he advised people who are pregnant to consult with their doctor before taking any acetaminophen-based medicine. It's important to note that some studies have linked Tylenol and other acetaminophens to future behavioral problems in children, and parents should weigh each and every option carefully before coming to a final decision. That being said, Tylenol is generally the most trusted medicine amongst doctors for pregnant patients. Medical Director Dr. Orly Avitzur said about Tylenol, according to Consumer Reports:

It’s still by far the safest option for most expectant mothers.

As with other studies about pregnancies, it's important to note here that this study only outlines the possible risks for women who develop fevers while pregnant. If you do come down with a fever while pregnant, it doesn't mean your baby will definitely be born with a birth defect. This study simply provides important information about the relationship between fevers and neural crest cells, and the precautions pregnant people should consider if they do become ill.