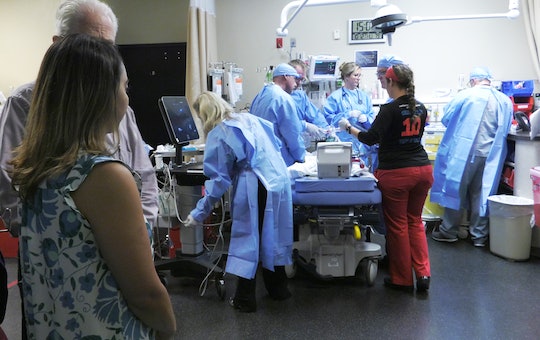 Having a severely sick or injured child is undoubtedly stressful, but being involved in their care and treatment could help lessen that stress. But, only a limited number of hospitals in the United States let parents stay with their child during trauma care, even though studies have shown that inviting parents to be a part of the process could be beneficial to their care as well as put worried families at ease.

In fact, studies previously done on the subject have shown that having family in the trauma ward doesn't negatively affect the level of care or end results, according to The New York Times, but very few institutions are putting this principle into practice. However, the Orlando Health Arnold Palmer Hospital for Children, for example, does. The medical institution recently conducted national survey that uncovered "90 percent of Americans think parents should be able to stay with their child during treatment of a life-threatening injury or condition."

Although some might argue that parents might be distracting or unnecessary to the medical process, staff members at this hospital have found benefits to welcoming parents into the room. And even though the hospital has had this policy in place for years now — as do others across the country — it's actually a not a common practice that other pediatric trauma units have adopted.

"It’s a common misconception among caregivers that parents will be a distraction in the trauma room, but I’ve actually found that it’s a benefit that not only comforts the patients and parents, but helps guide the care that’s given in those critical situations," Donald Plumley, MD, a pediatric surgeon and medical director for pediatric trauma at Orlando Health Arnold Palmer Hospital, said in a press release of the survey.

Not only are parents "a valuable resource for information on their child such as allergies, medical history and details on their injury or condition,” Plumley explained, but they help "tremendously if a child is agitated or scared, and oftentimes we’re even able to forgo sedation or administer less pain medication because the parent is able to keep the child calm."

At this particular hospital, it's not as if the parents hover over their child, unattended. A staff member — be it a social worker or a chaplain — "is taking care of the family and explaining what’s happening every step of the way,” Plumley explained in the press release. This middleman allows for a smooth interaction and exchange of information between parties.

“It’s very difficult for a parent to watch their child go through an emergency medical situation, [but] it’s much harder for them to be in a waiting area knowing that their child is scared or in pain and not knowing anything about their condition or what is being done to treat them," Plumley said in the press release shared by the hospital.

According to the Children's Hospital Association, another recent study on the subject found that 94 percent of families who were present during their child's trauma care said "they provided emotional support to" their little ones, while 92 percent of parents said "they gave health care information about their child to the medical team."

Still, it's not a widely-accepted policy for an array of factors. As Lori Vinson, senior director of trauma, emergency services, EMS, PESN, emergency management and injury prevention at Children's Health in Dallas, explained to the Children's Hospital Association:

With trauma, most of these children have never been sick, and they usually don't have any kind of long-term condition, so their families may have never been to an emergency room before. And with trauma, there's blood; there are visible injuries; there can be distortion of the way a child looks.

As Plumley stressed in the press release, parents are an integral part of a young patient's trauma care and he hopes that this kind of involvement becomes a more common practice. "Every person on the medical staff has their place and their tasks, and that now includes the parents to the point that I look for their input when treating a patient," he explained.

It's not a requirement, but having the opportunity to offer support can give parents a sense of security that's typically absent in a bleak hospital waiting room.