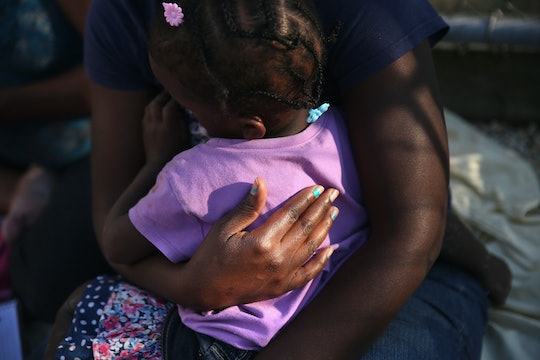 Fewer Children Are Living In Poverty, But There's Still Room For Improvement

Unfortunately, the world is far from perfect. Despite the United States being (relatively) free from famine, war, and other terrible events, America still has a lot of issues. There are disappointingly high numbers of instances of gun violence in the United States, unacceptable levels of police brutality, and some cities in America don't even have clean drinking water. However, some things are starting to look up, sort of, that is. That's because new research suggests that fewer children are living in poverty, but some things still need to change to help all kids get out of it.

The number of children living in poverty in the United States is technically declining, but it is still higher than the adult poverty rate, according to the United States Census Bureau. According to the report, "Between 2015 and 2016, the poverty rate for children under age 18 declined from 19.7 to 18.0 percent." However, it is still above the adult poverty rate, which was measured at 11.6 percent, and senior's, at 9.3 percent. So, while progress is technically being made, there is still a lot that needs to be done in order to reduce the number of children living in poverty in America — because no child should have to worry about where they're going to live, or what they're going to eat.

Here are some things that could help:

As the American Academy of Pediatrics noted, the United State's Early Head Start program currently only serves approximately 3 percent of low-income families, which means that if it were to receive increased funding, it could expand its programing. The Early Head Start programs are federally funded and aimed at serving families and children with education, as well as nutritional resources and job training for adults.

If these programs were expanded, children and adults would be able to receive the help they needed, and be better prepared for success later in life.

Supplemental Nutrition Assistance Program — commonly referred to as SNAP— is another federally-funded way for low-income families to receive assistance to help pay for groceries and other necessities. It, along with the Supplemental Nutrition Program for Women, Infants, and Children (WIC), seeks to help families and single women and mothers maintain healthy lifestyles. WIC, in particular, provides funds to states to give "supplemental foods, health care referrals, and nutrition education for low-income pregnant, breastfeeding, and non-breastfeeding postpartum women, and to infants and children up to age five who are found to be at nutritional risk," according to the program's website.

By expanding SNAP and WIC programs, children in poverty won't have to worry as much about eating nutritional foods and can instead focus on school and work.

Another way the AAP suggests that could reduce the rate of child poverty is a form of survey. Specifically, "pediatricians can use screening tools that have high sensitivity and specificity," the AAP suggests. The "WE CARE survey," in particular is a set of questions aimed at understanding a child and/or their family's particular situation and seeing if there is any "stress related to poverty."

By asking participants simple questions related to food insecurity, such as "Do you have difficulty making ends meet at the end of the month?" as the AAP recommends, pediatricians may be able to see the individuals and families that are the most at-risk and in need of resources. And from there, forms of help can be suggested.

Of course, all of these solutions need to be done in cadence with each other for them to really work. And, yes, there are many more ways to help the lower the child poverty rate. But, hopefully, policymakers can figure out a lasting solution because no one, especially children, should have to worry about being able to afford to live.