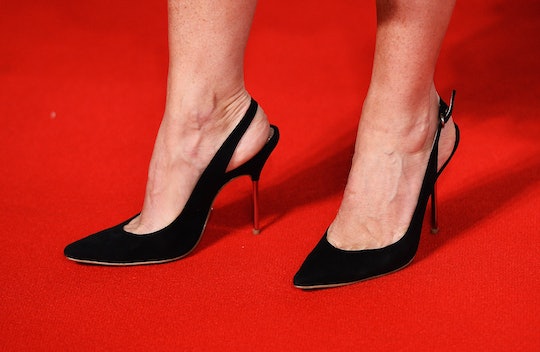 When it comes to women's rights, progress has always been a little slow. But a recent study found that although the gender wage gap persists and equality is still a long way's off, women are finally ditching one longstanding product that some believe are a symbol of the patriarchy: High-heeled shoes. Yup, according to a new study, fewer women are wearing high heels and switching to sneakers, which makes total sense.

In the name of full disclosure, I'll admit that I love high heels. I love the way they make my legs and butt look, I like the sound they make when I practice my best Olivia Pope walk, and as a 5 foot 1 inch tall woman, I like being able to reach the top shelf at the grocery store.

But I can only stand the things for so long. In fact, I bring a pair of Converse sneakers to every single wedding I go to, just so I can be comfortable as soon as the pictures are over. I can't last a whole work day in the things. High heels are works of art and they're beautiful and fun to wear, but they are, at the end of the day, oppressive AF. Even if you're a pro at walking in them and can afford the fancier brands that don't actually make your feet hurt too much. This study proves that the rest of the world is finally alright with women wearing footwear that doesn't cause them actual bodily harm.

According to CBS News, a survey found that the most popular shoes these days in the United States aren't heels at all, as women are apparently buying more flats and athletic sneakers. The survey found that the sale of heels has dropped 12 percent in the past year and women's sneaker purchases have gone up 37 percent.

Travis Hutchinson, a manager at Lord & Taylor in New York City, told CBS News that heels are still a classic, but women are choosing practicality over stilettos. He told the news outlet, "Comfort is trending. That is like the number one thing. Women want to be comfortable. You're seeing women wearing sneakers with their suits, as well. Pencil skirts, dresses... It's a huge trend."

And not in an uncomplimentary, pull your Reeboks on before you leave the office kind of way. There are so many adorable styles of casual shoes out there that look great with skirts and dresses. Pairing a fresh pair of sneakers with dress clothes is in. Luckily, our society doesn't dictate that women dress a certain way for the office anymore, much like all men don't have to wear suits either. We can probably thank Silicon Valley for that — when Mark Zuckerberg can make millions and wear a hoodie to work, we all can, right?

Heels can be empowering, but they are also something that we've been socialized to believe is "sexier" than any other type of shoe. A French study once had a group of women approach men wearing flats and then heels, switching shoes every 10 men, as TIME reported. They approached the men and started talking to them and the results are depressing. When the 19-year-old women approached men between the ages of 25 and 50 years old wearing high heels, 83 percent of the men spent three to four minutes answering her questions. When she was wearing flats, only 47 percent stopped to talk for as long.

This led the researchers to go even further, instructing the women to find "marks." They would walk ahead of the man and drop a glove. When a woman was wearing heels, 93 percent of men chased after the woman to return the glove, whereas only 62 percent did when the woman was wearing flats, as TIME reported of the study. Mind-blowing, right?

In all, it's probably a good thing that women are starting to opt for clothing choices that make them happy as opposed to what please the male gaze. So keep on rocking those Adidas with your little black dresses. Just make sure you don't drop a glove or anything, since you might not get it back.