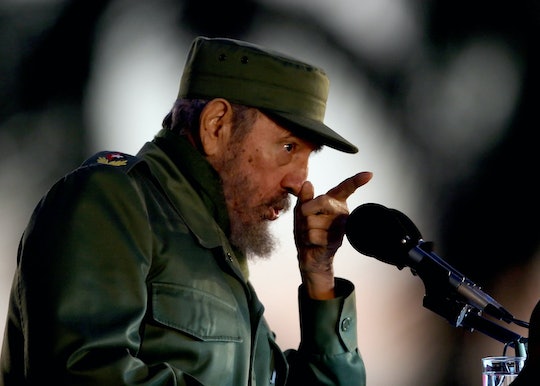 Fidel Castro Dies At 90 After Years Of Declining Health - REPORT

Late Friday night and after years of suffering from declining health, the Associated Press reported former Cuban President Fidel Castro has died at 90. Castro's death was announced via state television by his brother and successor, current Cuban President Raúl Castro.

Castro's death ends a complicated and unsettling relationship between the former-president and revolutionary leader, and the United States. Castro was an instrumental part in the Cold War, brought on the Cuban Missile Crisis that pushed the United States (and the rest of the world) to the brink of nuclear war, openly defied more than 11 sitting United States presidents, and was responsible for the communist revolution in Cuba. Castro held onto power longer than any other living national leader in world history (except Queen Elizabeth II), and continued to white-knuckle his hold on political influence long after he resigned, handing the majority of his power over to his brother after being hospitalized for diverticulitis in 2006. In 2008, Raúl would take full control of the Cuban presidency, due to Castro's continued declining health. The United States condemned the transition, claiming the transition of power from Castro to his brother was nothing more than a way to continue his dictatorship, despite his health concerns and inability to rule, and deny the Cuban people an opportunity to appoint their own president.

At just 32, Castro became the youngest leader in Latin America after he overthrew former president Fulgencio Batista on Jan. 8, 1959. The United States was among the first countries to recognize Castro's government, hoping the young president had hopes of restoring democracy. However, Castro's infamous, "Socialism or death," was Castro's revolutionary rallying cry, and his dedication to socialism remained steadfast and unwavering. As a result, Castro endued (and essentially survived) an unforgiving United States trade embargo, as well as numerous reported assassination attempts.

Castro had grown increasingly frail since his brother Raúl, now 85, and was rarely seen in public. However, that didn't stop Castro from speaking out when United States President Barack Obama used his executive power to normalize diplomatic relations between the United States and Cuba in Dec. 2014. Two days after President Obama visited Havana, Castro said, "We do not need the empire to give us anything," proving that while he was no longer the face of the Cuban presidency, he still had a significant amount of influence within the Communist Party.

To some, Castro was a revolutionist and a source of strength and determination. For others, he was a vile dictator and tyrant. Regardless, an era of Cuban politics and history has ended. Perhaps a new one will have the freedom to begin.