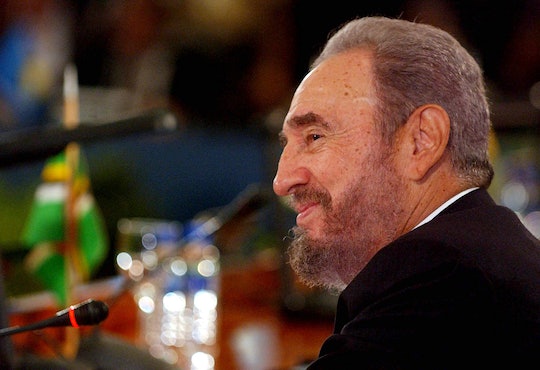 Fidel Castro Quotes Show He Was A Defiant Leader

Many people woke up to shocking news on Saturday morning — former Cuban leader Fidel Castro died at 90 on Friday. The news brings both joy and grief to some, according to CNN, and is something that the world will be coming to terms with in the following weeks. Castro's legacy is something that will surely live on forever, having already been cemented in the history books. This is why Fidel Castro quotes will ensure that Castro will be remembered for who he was.

Some background on Castro to put his quotes into context — Castro was a leader in the Cuban revolution, overthrowing military leadership in Cuba in 1959, according to BBC News. But with the great power that Castro bestowed came some big decisions — Castro declared it to be a communist revolution and allied Cuba to the Soviet Union. With Cuba under Castro's leadership, the United States tried to "topple" Cuban government and there had been multiple attempts to assassinate Castro, according to Al Jazeera — yet Castro was unfazed. According to The Guardian, Castro was successful in providing free healthcare and education to Cuban citizens, yet could be described as a "cruel dictator." His quotes during his time of leadership confirm this resilient attitude and a legacy that will be remembered for years to come.

Condemn me. It does not matter. History will absolve me.

Castro said this in 1953, during the trial for a rebel attack that launched the Cuban revolution, according to NBC News. This statement is ironic and eerily true to this day — the reactions to Castro's death have been incredibly varied. After Castro's death, many world leaders have chosen to focus about the positives about Castro's leadership. On the other hand, others are having adverse reactions. While history might not exactly absolve Castro, he will be remembered in both a positive and negative light.

On the second anniversary of the Cuban revolution, Castro said this statement in a speech. The cuban revolution was definitely not a bed of roses — and while he successfully overthrew the government of Cuba in 1959, many did not have any idea what Castro had in store for Cuba, according to The New York Times.

I promise that I will be with you, if you so wish, for as long as I feel that I can be useful — an if it is not decided in my nature before — not a minute less and not a second more...Now I understand that it was not my destiny to rest at the end of my life.

Castro said this in 2003, after being re-elected to a sixth term as Council of State president, according to ABC News. Just two years after giving that speech, according to NBC News, the CIA concluded that Castro suffered from Parkinson's disease.

I think that a man should not live beyond the age when he begins to deteriorate, when the flame that lighted the brightest moment of his life has weakened.

Castro stepped down from leadership in Cuba in 2006, when he health had started to weaken, according to International Business Times. Castro's brother, Raul has since taken over and Castro has been out of the spotlight for quite some time up until his death.

I'll be 90-years-old soon. Soon I'll be like all the others. The time will come for all of us, but the ideas of the Cuban Communists will remain as proof that on this planet, if one works with fervor and dignity, they can produce the material and cultural goods that human beings need and that need to be fought for without ever giving up.

It was clear that Castro never gave up — as his time as a leader in Cuba led him to become one of the world's longest standing rulers. While a lot of people had opposition to his rule and on spite of all of the attempts to make him give up, Castro remained defiant.