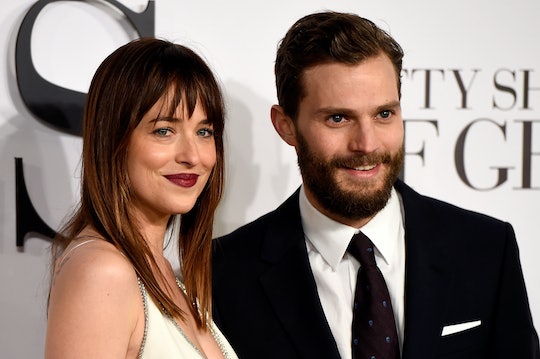 'Fifty Shades Of Grey' Soundtrack Got 4 Grammy Nominations, So The Movie Did Something Right

Just when you think you couldn’t possibly hear anything new about the first Fifty Shades of Grey movie, it’s popping up again somewhere sort of unexpected: the 2016 Grammy Awards nominations. Although the film (and the book, come to think of it) wasn’t exactly loved by critics, there’s no denying it was a huge commercial success, earning more than $81 million at the box office in its opening weekend alone, and setting records as one of the biggest R-rated movie debuts ever. And now the soundtrack to the film is also gaining major accolades, with songs from Fifty Shades Of Grey earning Grammy nominations during the announcement Monday morning.

Even if you weren’t a fan of the steamy film, chances are you at least liked something about the soundtrack. Thanks to big hits from The Weeknd and Ellie Goulding, in addition to more standard movie music fare from well-known score composer Danny Elfman (not to mention a bunch of other stand-out tracks in between, including two amazing Beyonce remixes, as well as songs from Sia and the Rolling Stones), the music from the movie was pretty memorable, even if the movie itself might not have been.

So what awards might Fifty Shades of Grey walk away with on music’s biggest night? Let’s take a look: