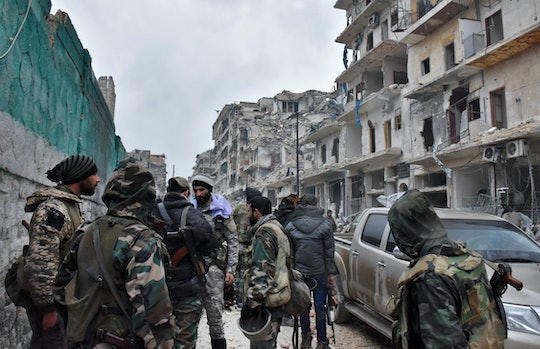 Fighting In Aleppo Has Resumed, Just One Day Following A Cautious Ceasefire

The current situation in Aleppo is absolutely devastating. People have been unable to escape the battle currently taking place in the once bustling city, where devastation continues to occur and peacetime is fleeting. After a ceasefire was put into place on Tuesday night, many thought the fighting would come to a halt for good. Unfortunately, fighting in Aleppo has resumed due to disagreements, and according to The Wall Street Journal, airstrikes continued on Wednesday after the tentative agreement crumbled.

Though they reached an agreement for a ceasefire, Russia and Turkey on Wednesday continued to disagree over the terms, allowing for fighting to continue. The original ceasefire had been agreed upon between the two countries earlier on Tuesday, according to USA Today. The ceasefire was put in place to evacuate rebels from Aleppo and give civilians a break from the constant warfare. But just one day after the ceasefire was reached, airstrikes started up again, as rebels continued to push back.

The evacuation of citizens began early Wednesday morning, according to ABC News, but soon the evacuations turned violent. Those looking to leave by bus were turned away by "pro-government militias manning the checkpoints." It was then when the ceasefire was halted and the fighting continued, devastating families looking to leave the war torn city. According to NPR, Syrian fighter jets resumed bombing raids during the day. People looking for some relief on Wednesday were unfortunately met with the opposite. Some had packed their things, ready to leave, according to The New York Times, but were sent running for their lives as the warfare resumed.

However, just as fast as the ceasefire came to a halt, a new ceasefire was reportedly reached, according to BuzzFeed News. Evacuations for citizens in Aleppo will reportedly begin again on Thursday morning. However, according to Reuters, there are already disputes about whether the ceasefire is back on track and who would be included in the evacuation — and according to the BBC, there has been no confirmation from Russia or the Syrian government so far agreeing to this new ceasefire. Just like the ceasefire that was agreed upon on Tuesday night, Thursdays evacuation could still have the potential to fall apart.

According to NPR, tens of thousands of people could still be trapped in Aleppo — there is unfortunately, no way to tell how many people remain. Hopefully this new ceasefire will stay in place long enough for people to be able to evacuate from Aleppo safely; There is reportedly "no food, no fuel, and no medical care available, and that the streets are filled with carnage," the outlet reported.

While Tuesday's ceasefire quickly dissolved, hopefully the ceasefire put in place on Wednesday will remain and allow people to escape.