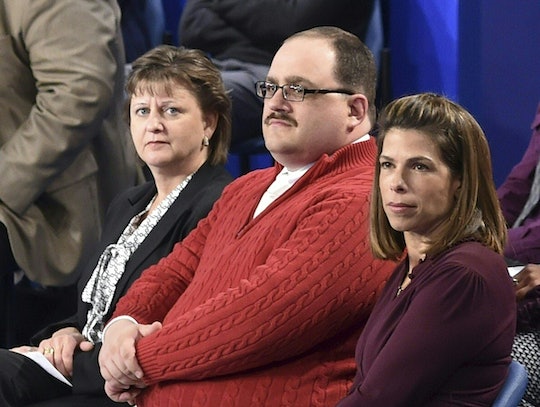 The 2016 presidential debates have bestowed many gif(t)s upon us: the Hillary Clinton shimmying meme, Donald Trump stalking his political opponent like a shark in an ill-fitting suit, an obscurely topical Halloween costume you won't recognize in 20 years (Ken Bone), and a hefty chiropractic bill for that nerve you tweaked from cringing so hard when a candidate for president had to address his sexual assault brags in front of a female opponent. But the last standoff before election night is finally upon us and with it come its final presidential debate memes.

It's been a lot, to be sure. It's been so much, in fact, that two anthropomorphized mayonnaise jars bloviating courteously over one another during the vice presidential debate was a welcomed bore! But we can't expect a throwback to the days of mere public policy outlines anymore. This is a historic election, between the first female candidate put forth by a major political party, and the first candidate with zero political experience put forth by a major political party in the modern era. Luckily, the internet is here with plenty of jokes to soothe our frayed nerves. Here are enough final presidential debate memes to tickle even your inner middle school student who dreaded having to write boring recaps for social studies.

There's plenty to joke about tonight, too: Melania wore her infamous pussy bow! Scott Baio is in the audience! Sarah Palin is in the house! Add to the mix that this debate is the closest one to Halloween (spooky!) and that the final presidential debate takes place in Las Vegas, and Twitter was ripe with meme-able moments.

Hillary Clinton was rocking an all-white suit, which we can only assume Shonda Rhimes advised her to wear and picked out for her.

Of course, as soon as debate conversation turned to Supreme Court nominations, RBG joined the party.

At some point, Clinton stopped being able to hide her reactions in her facial expressions — a skill she typically slays at.

But that's not super surprising, considering that the night, once again, took aim at Donald Trump's sexual misconduct allegations, which he addressed by pivoting to Clinton's email scandal. Actually, Trump was kind of the master of pivots during the final presidential debate.

And lastly, in one final meme-able moment, Donald Trump called Hillary Clinton "such a nasty woman," which is just so ripe for reclamation that a screenprinted tote emblazoned with the words is somehow already hanging in my closet.

It's been real, folks, but honestly, let's wait four more years before we get this nasty again.