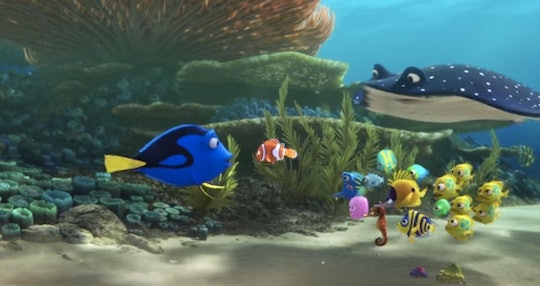 'Finding Dory' Could Hurt Wild Fish Populations, But Here's How Parents Can Help

When Finding Nemo was first released back in 2003, marine biologist Anita Nedosyko was researching the clownfish and was shocked to see how the movie's popularity inspired fans to head out to the pet store to get a "Nemo" clownfish of their very own, putting heavy strain on wild clownfish populations at the time. Now that the movie's sequel is poised to become a summer hit this year, scientists warn Finding Dory could endanger wild fish populations yet again and are taking steps to stop damage to the wild clownfish and regal blue tang just because kids want a "Nemo" or "Dory" fish all their own.

Nedosyko told the Brisbane Times that the movie itself isn't doing any harm; rather, it's kids' reactions to the movie and parents' purchasing decisions that leads to impacts on ocean ecosystems:

I was shocked by how many people came in to get clownfish when that movie was released. There was a 30 percent increase and that concern for us is that we are going to start seeing a resurgence in popularity for that population with not just clownfish, but also 'Dory,' the regal blue tang.

Nedosyko isn't against kids having a Finding Dory-inspired pet. She said the problem is that the wild clownfish like "Nemo" and wild "Dory" fish, the regal blue tang, are largely sourced from the wild, which puts incredible pressure on their already-fragile habitats like the Great Barrier Reef. Instead, researchers like Nedosyko want to encourage breeding of fish for sale as pets in nurseries instead of taking them from the wild, which, she says, can cause post-traumatic stress and significantly reduce the fish's lifespan. The regal blue tang, she said, is in the most danger, since there are no nursery breeding operations for those types of fish and all those sold as pets are taken from the wild.

So to try and save as many fish and raise awareness of the stress taking fish from the wild can put not only on fish species, but also on their habitats, researchers from the University of Queensland and Flinders University at Adelaide created the Saving Nemo Conservation Fund to boost the supplies of nursery-bred fish to meet the inevitable demand they think Finding Dory will inspire in families. According to the group's website:

We have pooled together our expertise for the sole purpose of funding nursery-breeding programs so we can stop the need to collect wild caught fish, research projects that help conserve wild populations and education programs that enable people to learn how to protect, breed and care for marine ornamental fish. We are funded through profits from fish sales, partnerships, grants and donations.

Besides asking whether any fish you're buying for pets have been taken from the wild, there are other ways you and your kids can get involved in actually saving Dory and Nemo for reals. Right now, the Saving Nemo Conservation Fund is promoting its "A Million Kisses For Nemo," a social media campaign where people can take their own "kissing" pictures, tag three friends and include Ellen DeGeneres, who lends her voice as Dory, to try and put pressure on the famous comedian to promote conservation and nursery breeding of ornamental fish species. Just take your own kissing selfie and share, tagging three friends and DeGeneres with the hashtag #FishKissForNemo.

So this summer, if parents find themselves contemplating whether to buy their kids a "Dory" or "Nemo" of their own, they should make sure that, before they buy, they're asking the right questions about where the fish were taken from. But, most importantly, the film might provide parents around the world with the opportunity to talk to their kids about ocean conservation and the role everyone has in saving all the Nemos and Dorys in the ecosystem.

In the meantime, here's the Finding Dory trailer to get you in the mood to help our oceans and the fish who live there.