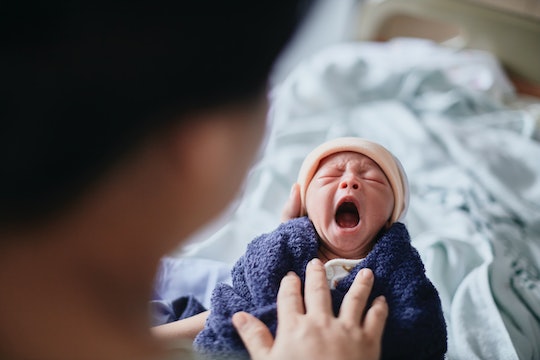 While parents in the United States have yet to be granted any kind of paid family leave, Finland's female-led government has moved to improve and strengthen its own policy, already one of the best in the world. Designed to be gender-neutral and supportive of diverse, non-traditional family structures, Finland's parental leave policy will support both parents equally when it comes into effect in 2021. What's more, it seeks to give single-parents an extra boost by allowing them to take the same amount of paid leave that a family with two parents would.

Finland's Ministry of Social Affairs and Health announced Wednesday that it had reformed the country's family leave policy in an effort to invest in children and families' well-being. Under the new policy, parents in Finland will be granted 164 business days, or roughly seven months, of paid leave no matter their gender for a total of 14 months paid leave per family. Previously, families were allotted a total of 11.5 months paid leave, with women receiving double the amount of leave that men received.

Should one parent in a family need more leave than the other, one parent can transfer up to 69 days of their own leave to their partner, according to the Ministry of Social Affairs and Health. Additionally, Finland's new policy will also grant single parents access to the entire 14 month paid leave allowance, enabling them to take the same leave as a two-parent household.

Time off granted through Finland's new equalized family leave policy is also set to be counted separately from the country's pregnancy leave allowance, which enables a pregnant parent to take leave from work roughly one month before their parental leave allowance begins.

Finland's Ministry of Social Affairs and Health has hailed the policy's reform as an opportunity to create family leave legislation that's actually in line with what modern families look like through gender-neutral language and equal time off. Ultimately, the added parental leave allocated by the new policy, which lawmakers have estimated will cost the country and estimated €100 million, is meant to "improve equality between parents and make the lives of diverse families easier," the federal agency said.

While Finland's new family leave policy isn't the best in the world —that title belongs to Sweden, which gives families a total of 480 days — it's well ahead of anything available to parents in the United States. Although Congress passed a law granting federal workers 12 weeks of paid parental leave in December, the United States remains the only industrialized nation without a federally-mandated nationwide paid family leave policy.