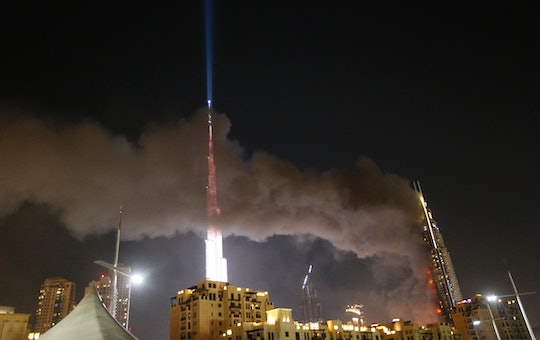 Fire At A Dubai Hotel Engulfs 40 Stories, But The Cause Is Still Unclear – PHOTOS

A fire has broken out at The Address, a five-star hotel located in Dubai, in the United Arab Emirates, according to Al Jazeera. Officials have said that the fire, which reportedly broke out on the 20th of the hotel's 63 floors, affected only the outside, and that no casualties have been reported. The city still plans to continue its New Year's Eve celebration and fireworks tonight at the nearby Burj Khalifa, the world's tallest skyscraper, even as terrifying photos of the Dubai fire emerged.

The Address, which hosts nearly 200 rooms and over 600 residential apartments, has been evacuated, according to Russia Today. Residents and guests were relocated to the nearby Dubai Mall. Although officials said there have been no injuries, photos and videos shared on social media depicted a terrifying scene, with hundreds of people fleeing the area to escape as the blaze raged, raining down burning debris.

The BBC reported Thursday afternoon, the cause of the fire is unknown. A tourist, Michelle Duque, described seeing the 1000-foot tall building go up in smoke, according to the BBC:

All of a sudden, we saw this huge black plume of black smoke coming between the Khalifa tower and the hotel. The flames burst out really big and before we knew it, the whole of The Address hotel was covered in orange flames.

Photos of the fire are terrifying and beg the question about its cause.