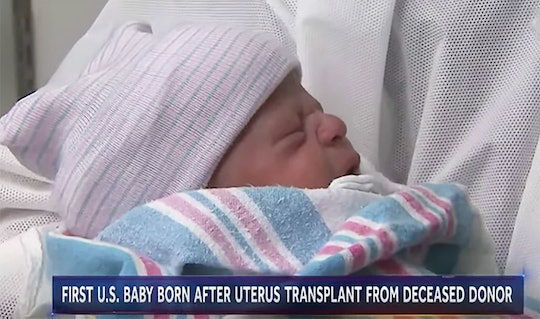 Baby Born From Dead Donor's Transplanted Womb For First Time In The U.S.

Doesn't it seem like with every passing day, the world has another medical miracle to boast about? Well, now doctors in Ohio say they have delivered the first baby in the U.S. born from a dead donor’s transplanted womb, and I'm in awe of what this scientific breakthrough could mean for the future.

As NBC News reported, Ohio's Cleveland Clinic announced Tuesday that a baby girl was born on June 18 as the result of a uterine transplant. The uterus, which was transplanted in late 2017, was provided by a dead donor, according to People. And in late 2018, "the mother, who is in her mid-30s, became pregnant through in vitro fertilization," according to The Plain Dealer. The baby girl was then born via c-section in June.

The maternal-fetal medicine specialist who oversaw case, Uma Perni, M.D., said in a press release about the incredible delivery: “We couldn’t have asked for a better outcome. Everything went wonderfully with the delivery; the mother and baby girl are doing great.”

The Cleveland Clinic has completed five uterus transplants to date, with three going successfully, and two more women are waiting to attempt pregnancy with transplanted wombs, according to ABC News. The clinic hopes to include an additional 10 women in its continuing study regarding uterine transplants.

Such a transplant, however, is usually from a living donor such as a friend or relative, with the first such successful procedure having taken place in Sweden five years ago, as NBC News noted. Since then, over 12 women worldwide have given birth. The U.S. recognized its first successful birth from uterine transplant in November 2017, according to Time. And in December 2017, Brazil reported the world's first birth using a deceased donor's womb, according to People.

It can't be understated how the emerging field of uterine transplantation could be a game-changer for some people who've experienced the heartache of infertility due to a uterine problem. As the Cleveland Clinic's website noted, the birth mother in this case was diagnosed with uterine factor infertility, a condition that prevented her from becoming pregnant.

Transplant surgeon Andreas Tzakis touched on the potential of uterine transplantation in a statement, saying: "Through this research, we aim to make these extraordinary events ordinary for the women who choose this option. We are grateful to the donor. Their generosity allowed our patient's dream to come true and a new baby to be born."

Dr. Perni also expressed excitement for the future, stating, according to the press release: “It’s important to remember this is still research. The field of uterus transplantation is rapidly evolving, and it’s exciting to see what the options may be for women in the future.”

Simply put, this birth of this little girl is incredible. It's amazing that in 2019, a person can give birth via transplanted uterus from a deceased or living donor. Not only can this procedure help those who struggle with infertility issues, but it acts as a reminder that the scientific field is ever-evolving.