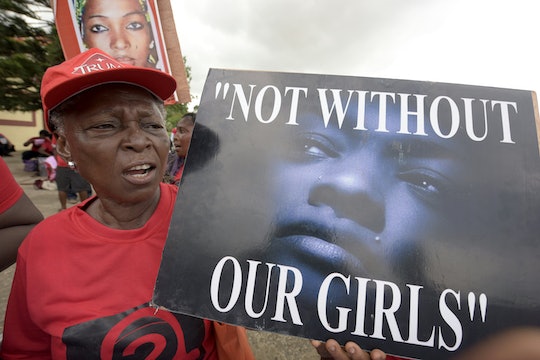 After two years, the first Chibok girl captured by Boko Haram has been found, according to BBC News. Amina Ali Nkeki, one of the 219 girls taken by the Nigerian terrorist group from a school in April 2014, was found Tuesday in the Sambisa Forest, after she was recognized by a fighter from the Civilian Joint Task Force (JTF), a vigilante group fighting Boko Haram. Nkeki is the first girl to have been rescued from the group following her abduction (276 were initially captured, though some were able to escape in the hours after Boko Haram seized the school, according to The Associated Press), and has reportedly told authorities that all but six of the 219 girls are still alive and in Sambisa. Her uncle, Yakubu Nkeki told The Associated Press that the now 19-year-old is pregnant, and understandably traumatized from being held captive, but is otherwise well and has been reunited with her mother. Some reports have said that she isn't pregnant, but already has an infant child.

It is thought that Nkeki might be only one of a number of Chibok girls who were rescued by soldiers Tuesday night. According to The Associated Press, Chibok community leader Pogu Bitrus has said he is working with officials to establish the other girls' identities. Nkeki's release is the first major victory for the girls against the group, despite the fact that the their capture made headlines around the world, and spurred forth the #BringBackOurGirls campaign. The total number of women and children kidnapped by Boko Haram over the past seven years is unknown, though it is estimated that over 20,000 people have died in Nigeria as a result of the insurgency.

The news of the rescue comes approximately one month after video footage of 15 captured Chibok girls was released by Boko Haram as a "proof of life." According to CNN — who obtained a copy of the video — the footage was shot in December as part of a negotiation between the terrorist group and the government, and was the first many of the girls' families had seen of them since they were abducted at gunpoint in their school dormitories. The video showed the girls standing against a wall, fully covered in robes. Each girl is asked to speak one at a time, stating their name and that they were taken from Chibok Government Secondary School. None, according to CNN, showed signs of mistreatment, but it's unclear whether the small number of girls seen on the video was truly reflective of the entire group.

The Nigerian government's inability to help the Chibok girls led, in part, to the political defeat of former president Goodluck Jonathan, according to The Guardian — the first time a Nigerian president has ever lost an election. According to the 2015 Global Terrorism Index, Boko Haram is the world's deadliest terrorist organization, killing even more people than ISIS, and a substantially higher number of private citizens (the group has, however, aligned itself with ISIS and considers itself to be the West African arm of the group, according to BBC News). But the fight against Boko Haram has ramped up over the past year, and the remote Sambisa Forest is thought to be the group's only remaining stronghold, according to Newsweek.