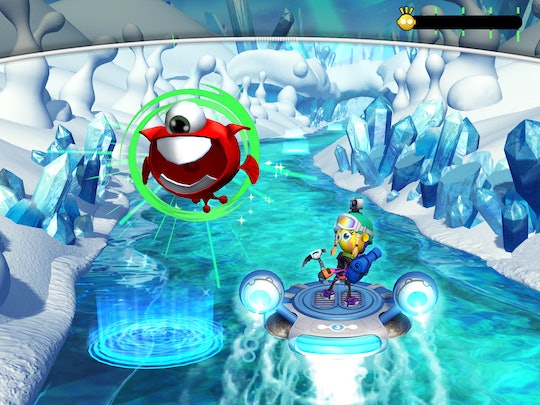 Developed by Akili, EndeavorRx is a non-drug prescription treatment option that aims to use a captivating video game experience to improve attention function in children ages 8 to 12 with ADHD. In the game, players steer a small hovercraft through various different environments, dodging obstacles as they come up and completing tasks such as collecting certain types of alien specimens.

While clinical studies have shown EndeavorRx to improve attention function, the game is not meant to completely replace proven ADHD treatments. "At present this should not be considered an alternative to other proven, effective forms of treatment," Scott Kollins, director of the Duke ADHD Program at Duke University and advisor and principal investigator for Akili's EndeavorRX, tells Romper. "That's a very important message for parents."

Of course, that doesn't mean EndeavorRx isn't a treatment worth exploring. In fact, Kollins applauded EndeavorRx for opening up new avenues of access for ADHD treatment. "One of the things that I think is most important about this is what it means for access for treatment," Kollins says. "We know that pharmacological treatment alone is typically not enough to fully manage optimally the treatment of ADHD. This provides a treatment option, particularly for the attentional problems which are present in the vast majority of kids diagnosed with ADHD, and it doesn’t matter where you live, as long as you have internet connection, you can access this treatment. That's huge."

According to Akili, EndeavorRx uses a special proprietary technology that presents children with sensory stimuli and simultaneous motor challenges designed to activate specific neural systems known to play a critical role in attention function. The game also uses adaptive algorithms to personalize the treatment experience for each user.

A randomized, controlled study published earlier this year in The Lancet Digital Health journal, found EndeavorRx "significantly improved performance on the primary outcome measure — an objective measure of attention (TOVA API) in pediatric patients with ADHD." After just one month of treatment, roughly half of parents reported seeing meaningful improvement in their child's attention. At the end of the second month, 68% of parents reported seeing improvements.

What's more, that study found no serious adverse side effects for children prescribed EndeavorRx. The most common reported side effects were frustration (reported in 3% of patients prescribed EndeavorRx) and headache (reported in 2% of patients.) Ultimately researchers concluded the digital nature of EndeavorRx's treatment could increase patients' access to non-pharmacological ADHD treatments, something Kollins is excited to see.

"Families need options," Kollins tells Romper. "We need the right fit for the right patient and this is just one additional arrow in the quiver to be able to battle some of the challenges that we see with kids with ADHD."

While EndeavorRx was cleared by the FDA last week, it's not yet being prescribed by doctors. Akili tells Romper they're working hard to have the game available via prescription soon. Until then, interested parents and caregivers can join Akili's EndeavorRx waitlist to ensure they're notified as soon as the treatment becomes available.