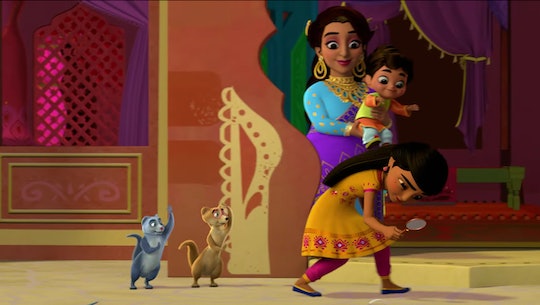 Get ready for a new heroine to join the Disney family. Set in a magical fairytale land inspired by the cultures of India, Disney Junior's newest animated series will center around an intelligent and resourceful young girl with unmatched investigative skills. To celebrate the upcoming series premiere, Disney Junior shared the the first look at Mira, Royal Detective exclusively with Romper.

"Having a young South Asian girl as the lead character in a show for young kids is a dream come true," Shagorika Ghosh Perkins, the consulting produce and cultural consultant for Mira, Royal Detective tells Romper. "I'm excited for my own daughter and other children of South Asian descent to have a character who looks like them onscreen, and for young kids everywhere to learn a little bit about South Asian culture and be inspired by Mira and her kindness and yearning to help others."

Created for kids age 2 to 7, Mira, Royal Detective will introduce viewers to Mira, a commoner in the magical land of Jalpur who is appointed the kingdom's royal detective by the queen. Together with her friend Prince Neel, her creative cousin Priya, and two comical mongoose sidekicks, Mira solves a number of fun mysteries. Of course, Mira, Royal Detective isn't just only about fun. Each of Mira's adventures in investigation is sure to encourage critical thinking and deductive reasoning in young viewers.

Additionally, the series aims to tell stories that celebrate Indian cultures and customs by incorporating authentic food, fashion, language, and art from the country into each episode. And because music and dance play such an integral role in Indian culture, each episode of Mira, Royal Detective will also include at least one original song and dance number showcasing the diversity.

"We can't wait to introduce the world to Mira when the series premieres next month," Diane Ikemiyashiro, Disney Junior's executive director of original programming, tells Romper. "When we started development on the series, we knew we wanted to create a show that celebrated the vibrant cultures and customs of India, while highlighting a smart, young female protagonist. What we love about Mira is that she believes every case is important, no matter how big or small, and she has a unique gift of observation that allows her to see situations from different perspectives."

Mira, Royal Detective is expected to premiere on both the Disney Channel and Disney Junior. You can catch it in the United States on March 20 starting at 11 a.m. EDT/PDT on the Disney Channel and 7 p.m. EDT/PDT on Disney Junior. And while the show has yet to even premiere, Mira, Royal Detective has already been renewed for a second season, meaning your kids can expect to continue to see Mira solving mysteries in the near future.

More Like This
Watch Jack Black & Rita Ora Bring Their Kung Fu Panda Characters To Life
Exclusive: CoComelon Is Going On A Live Tour Across the U.S.
Take An Exclusive Sneak Peek At 'Bluey' Season 3 Before It Lands On Disney+
Reese Witherspoon’s Son Deacon Is Officially An Actor & Is Working With One Of His Mom's Besties