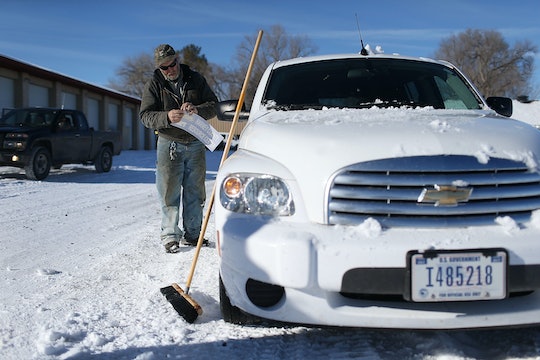 On Friday, Oregon State Police arrested a member of the Oregon militia, the group illegally occupying the Malheur National Wildlife Refuge in Burns, Oregon. Kenneth Medenbach, a 62-year-old resident of Crescent, was arrested on "suspicion of unauthorized use of a motor vehicle" when he was drove a refuge van — a federal government vehicle — to a nearby Safeway grocery store on Friday. A second refuge vehicle was also recovered at the store, but only Medenbach was arrested. Both vehicles were impounded by police. The charge is considered a Class C felony and, if convicted, Medenbach could face up to five years in prison.

The Oregon militia aligned themselves to protest on behalf of two Oregon ranchers convicted on federal arson charges, sentenced, and served light sentences for their crime. After ranchers, Dwight Hammond, Jr., 73, and his son Steve, 43, were then sentenced a second time to comply with mandatory minimum sentencing, the militia — organized by Nevada rancher Cliven Bundy — descended on the wildlife refuge to protest the re-sentencing. While Bundy himself isn't occupying the refuge, two of his sons are. Even when the Hammonds surrendered themselves to federal authorities on Jan. 4, the Oregon militiamen remain illegally occupying the wildlife headquarters.

According to The Oregonian, Medenbach is being held at the Deschutes County Jail in Bend on a $10,000 bail. Medenbach is currently facing federal charges in Medford, released in November. As a condition of his release, Medenbach was ordered not to occupy any federal land.

Oregon State Police have, previous to this, taken little direct action with the militiamen as their illegal occupation has now reached the two-week mark. Medenbach's arrest marks the first direct action by Oregon State Police, who have so far done little to remove the illegally camped — and heavily armed — protesters. Despite having their power and heat cut off from the building, the militiamen have so far refused to leave. Whether or not Medenbach's arrest will result in future arrests of the armed occupiers remains to be seen.