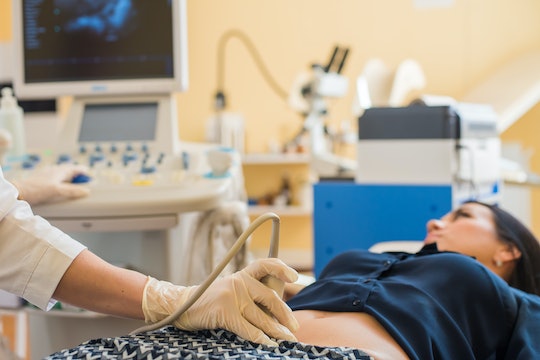 Some bleeding during pregnancy is pretty common, as much as it might seem a little scary. But a new study recently found that first-trimester bleeding is linked to lower birth weights in newborns, and that might sound alarming to expectant parents. But you can hold off on freaking out too much if you've experienced some bleeding during your first trimester, because there's still a lot we don't know about the correlation.

About 20 percent of women experience some bleeding during the first 12 weeks of pregnancy, according to WebMD. Minor bleeding is usually no cause for alarm, and can be caused by everything from implantation bleeding (after the fertilized egg implants itself in the lining of your uterus), to cervical changes, and more. But if the bleeding lasts for more than a day, this new study says there may be some slight cause for concern.

The new study — led by Dr. Katherine Grantz, an epidemiologist at the Eunice Kennedy Shriver National Institute of Child Health and Human Development — found that babies born at term to women who experienced bleeding early in their pregnancy for more than a day were about 3 ounces lighter on average, HealthDay reported. Clearly, the decline in newborn weight was pretty minor, but still notable to researchers.

Indeed, researchers acknowledged that decrease in birth weight was fairly small, and compared it to "observed decreases associated with maternal smoking" in the study's conclusion. Ultimately, the study couldn't prove cause and effect, and so women who have experienced some bleeding during early pregnancy shouldn't panic, WebMD explained.

In a press release from the Eunice Kennedy Shriver National Institute of Child Health and Human Development about the study, Grantz summarized the findings when she said:

The good news is that only one day of bleeding was not significantly associated with reduced growth. But our results suggest that even if bleeding stops before the second trimester, a pregnancy with more than one day of bleeding is at somewhat of a greater risk for a smaller baby.

But "somewhat of a greater risk" doesn't mean "time to completely freak out because your baby is definitely going to be underweight at birth." The researchers really seemed to be working hard to not cause panic by announcing the findings, while still accurately reporting on the conclusions they came to.

The study appears in Obstetrics & Gynecology, and also involved other U.S. research institutions besides the NICHD, according to MDLinx. It involved over 2,300 healthy, non-obese pregnant women — which is a pretty significant sample size — according to HealthDay. The study tracked fetal growth at six different points throughout the pregnancies, then finally recorded final birth weights as well.

In the study, 410 of the women experienced bleeding during their first trimester, WebMD reported. 176 experienced it for one day, and 234 had bleeding for more than one day. Grantz' team reported that just one day of bleeding seemed to have no effect on fetal growth, compared to bleeding over a more extended period, HealthDay reported.

Ultimately, the study authors cautioned that more studies are needed to determine if the infants with smaller birth weights linked to first-trimester bleeding are actually at risk for any additional health risks during infancy or later on in life, the NICHD/NIH press release noted.

Other, earlier studies on whether bleeding is really associated with "adverse" pregnancy outcomes have so far been "inconclusive," the press release explained. Future researchers will have to analyze further to more strongly identify a link between bleeding in early pregnancy and lower birth weights — even slightly lower weights.

But every new study like this brings us closer to understanding how to give every single baby a better chance at a healthy start, even if even more study is needed to really work out connections.

If you've experienced some bleeding early on in your pregnancy and are at all concerned, the best thing you can do is talk to your doctor about your worries. Indeed, in the NICHD/NIH press release, Grantz noted that when ultrasound exams indicate that a fetus is small for its gestational age, doctors usually increase the number of exams to monitor the pregnancy more closely, so making your doctor aware of any possible issue is the most proactive thing you can do. That way, if there is a problem, you can work on monitoring it and addressing it together.