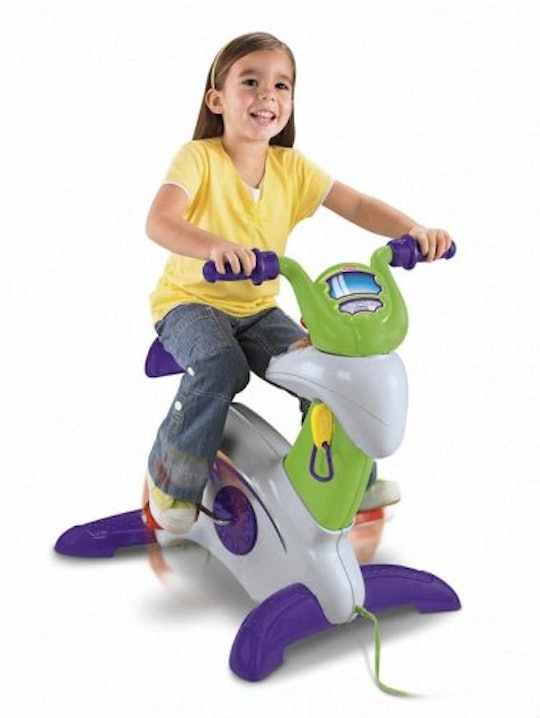 Fisher-Price Just Made An Exercise Bike For Kids

Ever thought that something as dull as a stationary bike was reserved strictly for adults? Think again! Toy giant Fisher-Price clearly thought outside the box when designing its newest children's toy, the Think and Learn Smart Cycle. The Fisher-Price exercise bike for toddlers connects wirelessly to televisions or tablets, where children can then use the bikes as, essentially, ride-on controllers to navigate downloadable games, which are designed to fuel their learning.

The idea isn't to replace children's outdoor cycling time, of course — or at least, it probably shouldn't be. But when parents are busy and kids are bored, this could be a better (and healthier!) option than reverting to an hour of tablet time or an oft-replayed movie. Parents can be reassured that kids are moving and learning, and children remain entertained.

The bikes connect via Bluetooth to tablets (which can be mounted on the bike's handles) or TVs that use Apple TV or Android TV. There are currently four games available that work with the Think and Learn Smart Cycle, and they can all be downloaded on iOS or Android systems. The apps, according to CNET, focus on improving children's math, science, social studies, and literacy skills, and parents can instantly track their children's learning through a Bluetooth-connected app. Fisher-Price has also promised to release more games in the future, as well.

Fisher-Price's new bike comes with a price tag of $150, and it's aimed at children between the ages of 3 and 6. "They're learning and mastering content as they peddle, fast or slow, forwards or backwards," Amber Pietrobono, a spokeswoman for Fisher-Price, told CNNMoney on Wednesday. "It's also how they level up in the games. ... It uses apps with powerful and engaging graphics. Kids can also save games and resume them when back on the bike."

While some parents have ridiculed the idea of a stationary bike for children — ever heard of a real bike? — it seems like a useful way to keep kids active during the winter months or while caregivers are too busy to nip outdoors. However, parents should remember that, despite the benefits of added exercise and learning, time spent on the Think and Learn Smart Cycle should probably still count towards children's total screen time.

According to the American Academy of Pediatrics, children ages 2 to 5 should probably be getting an hour of screen time a day at most. But if they're going to be looking at a screen, they may as well be pedaling off some of that extra wild energy before bedtime, no?

More Like This
Mom Gave Birth On The Side Of The Road... With Her Five Other Kids In The Car
Prince George Has Apparently Known He'll Be King Someday For A While Now
These TV Show's Graduation Episodes Will Tug At Your Heartstrings
Travis Scott Is Passionate About HBCU Education & Put $1 Million Towards It