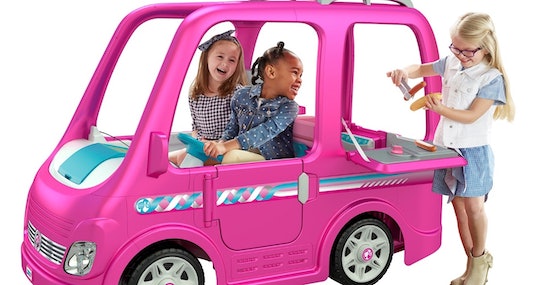 Fisher-Price Recalls About 44,000 Of These Barbie Campers Due To An Injury Hazard

Kids love mini-motorized cars. They come in all types of make and models, so every kid can find a car they want. But, recently, Fisher-Price recalled Barbie Campers due to a risk of injury. Recalls on children's toys can seem alarming, so here's everything parents need to know about this latest recall.

According to the U.S. Consumer Product Safety Commission, Fisher-Price issued the recall after learning, "The children’s ride-on Power Wheels can continue to run after the foot pedal is released, posing an injury hazard."

The recall currently involves the Power Wheels Barbie Dream Camper. According to the CPSC, the vehicles involved in the recall are hot pink with blue accents and have the Barbie logo printed on the back. They were reportedly sold exclusively at Walmart stores nationwide and online from July 2018 to January 2019.

It's important to note that the recall is only issued for vehicles with the model number FRC29, which can be found printed on a label under the hood. The CPSC noted these vehicles are battery-operated and include a play kitchen, a fold out grill, and a pretend campfire.

Fisher-Price did not immediately respond to a request for further comment on the recall.

If your kids' toy vehicle is impacted by the recall, Fisher-Price noted in a statement that you can have your Power Wheels vehicle repaired for free. To determine if your product is included in the recall, head over to Fisher-Price's website, which will walk you through the process.

"Our Authorized Power Wheels® Service Centers will remediate the vehicle with a new foot pedal and foot switch housing free of charge. In addition, the service centers will complete a free safety inspection," Fisher-Price said on its website.

If you have any questions, or own, one of the Power Wheels vehicles impacted by the recall, you are urged to call Fisher-Price at 1-800-348-0751, Monday through Friday between the hours of 9 a.m. and 6 p.m. ET.

They will help you set up a time to get your kid's vehicle repaired. If you don't live near one of their service centers, Fisher-Price's website noted a third-party vendor called RQA is available for a free in-home repair service.

However, the site did caution there may be a two to three week delay in scheduling home repair services.

According to ABC Action News, about 44,000 units are affected by this recall.

So far, according to the CPSC, Fisher-Price has received 17 reports of vehicles continuing to run after the foot pedal was released. Fortunately, there have been no reported injuries to date that the company or the CPSC is aware of. But, until it's fixed or inspected by the company, it's important for parents to remember to immediately turn off any vehicle included in the recall.

It's a really lucky thing that no kids have been injured so far and everybody wants to make sure they remain safe. If you own one of the vehicles affected, remember to shut it off and contact Fisher-Price as soon as possible.