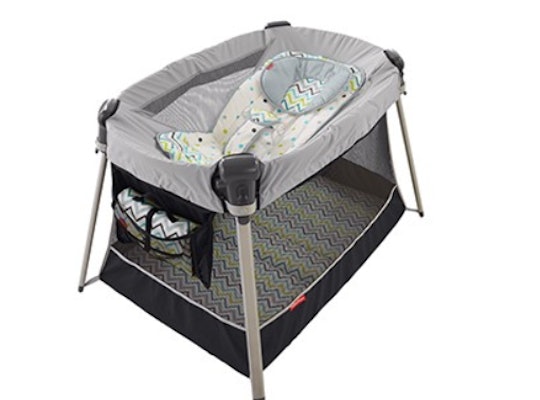 Months after the U.S. Consumer Product Safety Commission (CPSC) announced at least two brands of inclined sleepers have been recalled due to reports of infant death, one company has made another move to further ensure the safety of children. The CPSC announced this week that Fisher-Price has voluntarily recalled inclined sleeper accessories "out of an abundance of caution" and here's what parents need to know about the latest recall.

On Thursday, June 27, the CPSC issued a voluntary recall for the inclined sleeper accessory, which comes with all models of the Fisher-Price Ultra-Lite Day & Night Play Yards. Over 71,000 units, sold between October 2014 through June 2019, are included in this recall.

This convertible play yard allows infants to be able to play in an enclosed space, but also converts to a sleeper with the help of the sleeper accessory, according to TODAY, which attaches to the top of the playpen.

However, due to infant fatalities involving inclined sleep products like the Fisher-Price Rock n' Play, the company has decided to voluntarily recall the accessory as well. According to the CPSC's recall notice, there have been no incidents or injuries reported from using this specific accessory and it was recalled out of "an abundance of caution."

Back in April, Fisher-Price recalled all Rock n' Play sleepers due to at least 32 reports of infant death, according to Consumer Reports. In relation to that recall on inclined sleepers, the American Academy of Pediatrics (AAP) had shared concerns that the products did not meet the group's recommendations for safe sleep practices, which note that infants should sleep on a flat and firm surface.

In response to the recent recall, Fisher-Price General Manager, Chuck Scothon, told Romper in a statement that "safety is our highest priority" and the company approached the agency with their concerns.

"We are voluntarily recalling the inclined sleeper accessory included with the Ultra-Lite Day & Nite Play Yard in partnership with the CPSC. Even though there have been no reported injuries or fatalities involving this product, we approached the CPSC to initiate this recall..." Scothon said in the statement. "Safety is our highest priority and for almost 90 years, generations of parents and caregivers have trusted Fisher-Price to provide safe, high-quality products for children. We work hard to earn that trust every day."

Parents who own the recalled items can determine if theirs is affected by looking at the model number located on the fabric label inside of the play yard. According to ABC News, the following model numbers are a part of the voluntary recall:

If you're more of a visual person, Fisher-Price also has a very helpful online guide with photos of the individual sleepers for anyone who needs help determining if their sleeper is a part of the voluntary recall.