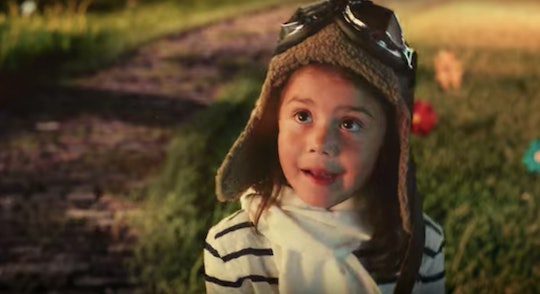 Parenting is nothing how I imagined it would be. One thing in particular that threw me for a loop was the task of entertaining kids, specifically what they played with and how. Because although toymakers clearly have an idea of how children might use their toys, reality is often very different. And Fisher Price's new ad campaign highlights just that and adorably displays how kids actually play with their toys.

I don't know about you, but I'm feeling like a kid all over again as a result of Fisher Price's latest ad campaign, "Lets Be Kids," which launched this past September. And I suppose that's the whole point. The quirky videos feature both adults and kids, with the idea that this is what little ones are really imagining when they play with toys.

"Let's remember what it was like to be little. When everything in the world could be something to play with and all it took was a little imagination to make something really fun happen," the campaign page reads. "Let’s get down on the floor, sing at trees, spend less time growing up and a little more time growing down. Let’s be kids."

A number of TV commercials following the theme have been released over the past several weeks. One featuring John Goodman is awesomely nostalgic, in my opinion, but they're all incredibly adorable. In fact, one ad shared on the company's Instagram on Oct. 26 is especially sweet and spot on. Featuring one of Fisher Price's staple toys — its Little People Caring for Animals Farm — flipped upside down with animals perched on the base, the caption on the photo reads: "Do upside-down cows say woo?"

I mean, doesn't this look like how a little kid might actually play with the farm? Because let's get real: Typically, toddlers could care less about putting the animals in stalls that have matching animals stickers on them, right? This Instagram post also spoke to parents, who likely played with some version of a Little People farm back in the day.

"I'm 38 years old and this barn is still my absolute favorite toy! Please tell me the door still moos when you open it," one Instagram user commented. Another person declared, "We love our fisher price farm! My 2 year old is OBSESSED with little people."

Along the same lines, Mattel, which owns Fisher-Price, released a new Elsa's Ice Palace commercial last month, also acknowledging that kids don't always play with toys as expected. The ad starts with a catchy jingle, "Elsa's Ice Palace, what a magical place. Look at her building the roof and staircase." The jingle suddenly stops and the little girl — donned in a princess dress — yells and screams, making Elsa stomp down the stairs, climb on the roof, and then go down the slide head first. (LOL, this is totally how my girls would end up playing with it!) "There's no wrong way to play. Do anything you want!" a woman speaks before switching back to singing, "in Elsa's Ice Palace."

Honestly? I'm just glad my kids aren't the only ones who do weird and sometimes destructive things to their toys while playing with them. This type of advertising is real, and it speaks to me. It also highly effective because now I'm seriously considering getting my girls an Elsa's Ice Palace and a Fisher Price farm. Curse you, marketing geniuses!