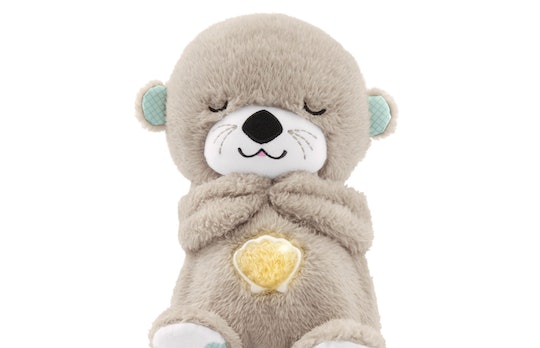 Omg, The Soothe 'N Snuggle Otter "Breathes" To Calm Your Baby, & It's The *Cutest*

I love otters more than I can possibly explain in the words I'm allotted here. They are the cutest little sea and river creatures, and it is my fervent hope that one day, I will be able to tickle an otter belly. When I saw the Fisher-Price Soothe 'n Snuggle Otter straight out of the New York City Toy Fair, I squealed. Not only is it an adorable otter lovey that your baby is sure to fall in love with, but it's also equipped with lights, music, and even a calming breathing pattern meant to calm baby in a way that only Fisher-Price can do.

The Soothe 'n Snuggle Otter will be available fall 2019 and retail for $39.99 — it's also given the age range of newborn and up. According to a press release on the toy, "The soother has a soft, satin tail for tactile stimulation and is machine washable with a removable electronics module." As well as the mimicked breathing, wherein the chest of the toy actually rises and falls, it also has calming light patterns and will play up to 30 minutes of music at any given time. It's basically a soft, tactile soothing toy with the function of a night light and sound machine. In short: it's magic.

My children had a ton of soother toys, most from Fisher-Price. A particular favorite was my daughter's Soothe and Glow Giraffe by Fisher-Price that she literally loved to death. It went everywhere with her until it got trampled at the park, and it had to go to the place for soothing loveys in the sky. My son had a Fisher-Price Soothe & Glow Seahorse that he used to prop up just so in the corner of his crib and stare at as he fell asleep. God forbid if that thing stopped playing before he was ready. Let me tell you, my husband and I were conditioned to squeeze that thing as soon as we heard it dip off from the monitor. Eventually, my son learned that if he banged it against the bars of his crib, he could reactivate it himself. Violent? Yes. It was also effective. (And hilarious.)

As for me, the first toy I remember truly loving was my Fisher-Price Gloworm. Its name was Wiggles, and my sister used to try to steal the batteries out of it before bed time because she said that it annoyed her. Well, the joke is on her because I took the batteries out of her boom box to replace the ones she stole. Take that, big sister.

Fisher-Price's new Soothe 'n Snuggle Otter is a step up from those previous incarnations of glowing animals. The breathing is next-level soothing, and with the addition of the silky fabric, this is a win all around.

The fact that it's an otter, an animal known for carrying its young around on its belly as it sleeps in the water is perfect. The imagery is the exact level of cuteness you've come to expect from the retail giant. I can see this being perfect for baby registries, or as one of those presents you bring to the parents right after the baby is born. It's adorable and sweet, but it's also shrewdly practical from a sleeping standpoint. At under $40, it's the perfect price point for a quick gift to friends or family, and let's be honest, it's going to be a favorite for years to come. You'll always be remembered as the friend who totally saved everyone's sleep.

More Like This
The 16 Best Subscription Boxes For Every Kind Of Kid
The Best Toys For 3-Month-Olds
20 Stocking Stuffers For Kids Under $20
Can You Give A Sleeping Baby A Breathing Treatment? Experts Explain