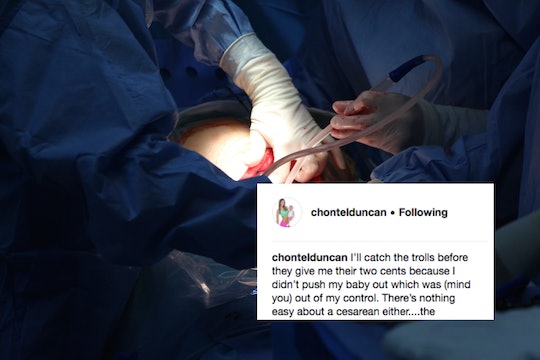 In a preemptive strike against the haters and sanctimommies she rightfully expected, "Fit Mom" Chontel Duncan's viral post about C-sections pushed back against the notion that surgical removal of baby is "easier" than vaginal birth, and that moms who have C-sections — whether by choice or not — are somehow "less than" those who did it the old-fashioned way. In a shocking turn of events (especially considering she's already been the target of social media mom-shaming), the positive comments are pouring in.

Duncan, a personal trainer from Australia, first gained international attention in November 2015, when she posted a photo on Instagram comparing her pregnant physique to that of her friend, Natalie Smith's. The pair have very different body types, their due dates were four weeks apart, and Smith was on her third pregnancy, while it was Duncan's first. Naturally, their bellies were not identical. While the post was meant to highlight how no two pregnant bodies are alike, Duncan was slammed by critics who called her selfish for continuing to exercise during pregnancy, and accused her of endangering her baby by not gaining whatever amount of weight some internet stranger deemed appropriate. For what it's worth, Jeremiah Thomas was born in March 2016, at a healthy weight, with no medical problems.

You'd think that would have been enough to silence the critics, but this past June, when Duncan was pregnant with her second child (her uterus once again not protruding as much as medically unqualified nobodies would like), an Australia tabloid ran an article about the rise of "pregorexia," or anorexia during pregnancy, which implied that Duncan had a role in the so-called disorder. Two Instagram photos of Duncan were included in the article, and a quote from an "expert" with no medical background was sandwiched in between. The quote cautioned pregnant women against using social media photos as a "benchmark," claiming that they're all fake. Duncan was also quoted, out of context.

I can't believe I have to say this, but let her live. Duncan's pregnancies are nobody's business but hers, and as she'd already proven a year prior, it's possible for some women to have a perfectly healthy pregnancy while appearing "less pregnant" than others. People come in all shapes and sizes. Even in the same uterus, multiple pregnancies can all look very different and still be medically A-OK. And a personal trainer, whose job requires her to have a very fit body and show it off, is in no way responsible for the physical or mental health of every random woman who happens across her feed.

So when Duncan had her second unplanned C-section, she was ready for the judgement from people who chided her for not having a "natural" birth. "I also believe this has become almost a trophy situation to some," she told CafeMom, "where if you don't push your baby out your vagina and use no drugs, you didn't complete the job correctly." There are even those who claim that C-sections don't count as a real birth, and despite the medical advancements we've made over the past few hundred years, some people think taking advantage of them is a sign of weakness, at least where childbirth is concerned.

Newsflash from Duncan (cosigned by me): that is just plain wrong. As Duncan wrote in her Instagram caption, "There’s nothing easy about a cesarean either....the tugging, the pushing, the sounds, the smells, the feeling of no control, the fear of something going wrong, the recovery it all terrifies me." A C-section is major surgery, during which the patient is awake. Then, suddenly, there are two patients in the room, and one of them is strapped down and unable to hold or even see the second one, aka, their new baby, because they're busy getting their organs rearranged. It's not a walk in the park. The definition of birth (yup, I went there) is "the emergence of a new individual from the body of its parent." Whether that baby comes out of a vagina, a surgical incision, or your ear, it still counts. So let's all make our own medical decisions based on what's best for us, and let everyone else do the same.