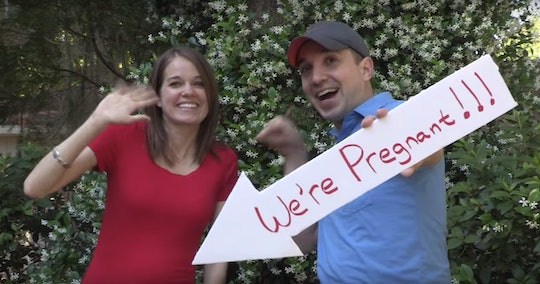 When my husband and I conceived our first and only child in the fall of 2013, we were too excited to think. We couldn’t come up with a witty pregnancy announcement or even construct some sort of super cute surprise. Instead, we blurted it out at a family dinner (shortly after my already-suspicious mother-in-law offered me a glass of wine). So I’ve got to say, I give Erik Herrera and his wife, Rebecca, a ton of credit. Not only did they keep their pregnancy a secret, the couple it a secret long enough to make a pregnancy announcement “movie trailer.”

But Erik and Rebecca are no strangers to waiting. In an interview with TODAY, Erik explained he and Rebecca have been trying to conceive for five years. When their latest attempt at IVF proved successful, Erik knew wanted to do something truly special:

When any woman goes through infertility treatments, it's important to have a support network of others for her to lean on, especially during the failures. My wife sort of felt a little robbed that she couldn't have a normal, surprise pregnancy announcement. She thought everyone knew — that they were either in the support network or were praying for us — so I wanted to do something so special that she would nearly forget all of the past five years.

So what did Erik and Rebecca do? Well, they made an adorable and hilarious movie trailer about their pregnancy, entitled "Pregnancy: Official Trailer."

The trailer, which is narrated by voice actor Jon Bailey — of “Honest Trailers” — begins with a simple statement, "Welcome to Marriagetown." Clips of the couples' young life together flash across the screen before the very literal bomb drops: "That is, until everything you know suddenly goes down the fallopian tube. Pregnancy."

However, the Herrera's trailer is more than a four-minute pregnancy announcement. I mean, sure, it includes things you would expect — like ultrasound images and video and a sweet clip from when Erik and Rebecca first heard their unborn baby's heartbeat — but it also makes something of a social commentary about the not-so-great (and downright frustrating) aspects of pregnancy, like becoming a "petting zoo" and having to "endure countless unsolicited questions and comments," in a fun and jestful way.

Congratulations, Erik and Rebecca, and enjoy every minute of your 40-ish-week journey and of this "very emotional roller coaster" called pregnancy and parenthood.