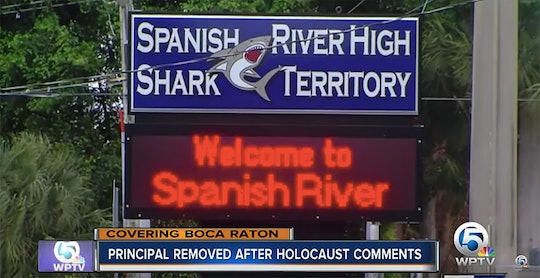 In this era of "fake news" and the rampant spread of misinformation, Americans are faced with separating fact from fiction at every click of their mouse and tap of their fingers. When it comes to public education, however, there's an expectation that teachers and principals won't approach historical events as matter of opinions. And suggesting otherwise is kind of a big deal, which is why educators and parents alike are outraged that this Florida high school principal reportedly told a parent that the Holocaust wasn't a "factual" event.

Yes, you read that correctly. The Holocaust. You know, that time when nearly 6 million Jews were killed in concentration camps in Germany? There was a second world war and everything.

In all seriousness, though, Principal William Latson of Spanish River High School in Boca Raton, Florida, reportedly refused to acknowledge the Holocaust as a fact in an email exchange with a parent, as USA Today reported. The situation occurred after the parent in question reportedly reached out to Latson in April 2018 with a concern about how the school teaches this disturbing period in world history. The mom — who didn't want her name published — even mentioned a 1994 mandate in Florida that requires Holocaust education in public schools. As for Principal Latson's alleged response? He supposedly argued that the Holocaust is a matter of opinion.

"Not everyone believes the Holocaust happened," he allegedly wrote at the time, according to The Palm Beach Post. "I can't say the Holocaust is a factual, historical event because I am not in a position to do so as a school district employee."

He continued, "You have your thoughts, but we are a public school, and not all of our parents have the same beliefs. I do allow information about the Holocaust to be presented and allow students and parents to make decisions about it accordingly."

Romper reached out to Spanish River High School and the Palm Beach County school district regarding the email exchange, and was referred via email to the district's official statement on the matter.

As one might imagine, the social media outrage has been pretty intense since the story broke on July 6. One Twitter user wrote, "Why wasn't he fired? People who deny actual history in favor of conspiracy theories should not be in charge of children's education."

Another person commented, "Dwight D. Eisenhower ordered photographs to be taken as historical proof of the holocaust because he thought that people would deny that it happened. How right he was with the suspicion."

Yet another Twitter user chimed in with, "This anti-intellectualism is a bad sign for the country and the world. The fact that a principal doesn't know what a fact is versus a conspiracy theory is terrifying."

In case you were wondering, Latson is no longer the principal at this specific school — although he has been reassigned to a position within the Palm Beach County school district, according to Business Insider. Meanwhile, an online petition for him to be fired has attracted than 8,000 signatures as of Monday.

It's worth noting, too, that Latson has since apologized for the email, telling The Palm Beach Post that the school's Holocaust supposedly exceeds state regulations. He added:

I regret that the verbiage that I used when responding to an email message from a parent, one year ago, did not accurately reflect my professional and personal commitment to educating all students about the atrocities of the Holocaust.

In light of the email exchange, Latson had been instructed to expand the Holocaust curriculum at Spanish River High School, according to USA Today. Additionally, he "spent several days at the United States Holocaust Museum to increase his personal knowledge," according to a statement from Palm Beach County School District.

"I assure you that this situation is being investigated at the highest levels of the District Administration," Frank Barbieri Jr., chairman of the school board, wrote in a statement on the district's website. He continued:

The School Board of Palm Beach County is, and always has been, committed to teaching all students, in every grade level, a historically accurate Holocaust curriculum; one which leaves no room for erroneous revisions of fact or the scourge of anti-Semitism.

While I'm sure many are relieved to hear that Latson is no longer a principal at this particular school — and that he had the opportunity to check out the Holocaust museum — it sort of feels like this is a case of too little, too late. That being said, it's important that this story serves as a reminder to educators and school administrators that the Holocaust isn't a matter of opinion.