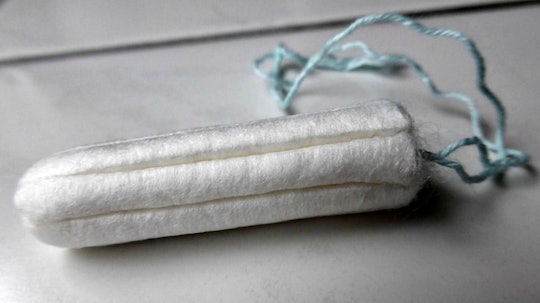 Florida not might be the first thing that comes to mind when one thinks about women's reproductive health and rights, but this week the state took a big step when it comes to helping women budget for their periods. This month, Florida voted to end its tampon tax, joining just 13 other states and the District of Columbia that have stopped labeling tampons and pads "luxury goods." Most states label feminine hygiene products as luxury items, subjecting them to an extra tax at the register, which is why tampons and pads are so darn expensive.

Last Thursday, Florida Gov. Rick Scott signed state tax legislation that would deem feminine hygiene products tax exempt year round. It was nestled in with other tax reforms, like granting a statewide, three-day grace period in June which would allow Florida residents to purchase storm-prep supplies, like flashlights, batteries, and generators, tax-free. It makes sense — just like flashlights and generators are necessary during hurricane season, women need pads and tampons year round.

Sen. Kathleen Passidomo, a Republican that led the fight for the tax exemption, said, "This common sense legislation will result in a tax savings for women all over the state who purchase these necessary products."

The tax exemption means that tampons and pads are now deemed medically necessary in the state, which is only fair, since women don't choose when, where, or how they menstruate. It's a tricky issue, since states are afraid to lose tax revenue on any number of hygiene products if they deem tampons and pads exempt. But tampons and pads are often unaffordable, whereas toilet paper is not.

Ironically, the fight to end the tampon tax is often dubbed a "feminist" issue. It is, of course, but it's something that even fiscal and social conservatives who might have an awkward relationship with feminism, like Florida's governor, can agree on. For Florida's lawmakers it was all about being against an unnecessary, and possibly discriminatory, sales tax. If it means affordable tampons and pads, so be it. The luxury tax affects all American women, despite their income level.

Florida joins a group of eight states, the District of Columbia, and a handful of states with no sales tax at all in ending the luxury tax on feminine hygiene products. It's not just an American thing, though. Women in the European Union are still fighting to get rid of their own tampon taxes,while countries like Canada have recently abolished their version of the luxury tax on pads and tampons.

If Florida can abolish the tax, then other states should have no problem doing so. Sales tax is historically a state's prerogative, though it would be killer if some representative or senator introduced a bill that could find a way to federally regulate the luxury tax so that American women could be done with this nonsense once and for all. Eliminating the tampon tax couls be a bipartisan crowd pleaser, after all.