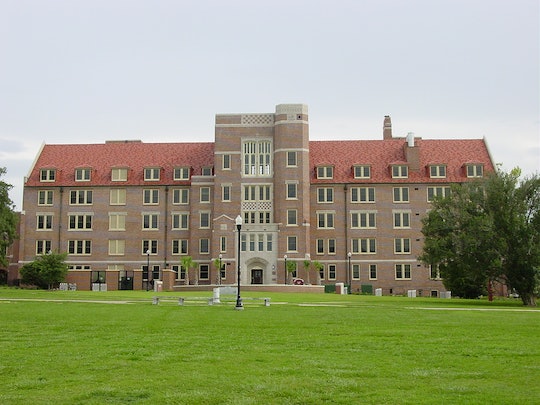 After a months-long legal battle, Florida State University settled with Jameis Winston's accuser for a sum of $950,000, according to the Tampa Bay Times. Erica Kinsman alleged that Winston raped her in December 2012 and, in a January 2015 lawsuit, alleged that the school violated her Title IX rights by not properly investigating the incident, according to the Orlando Sentinel. Her lawyers will receive $700,000, according to a statement from FSU, but the lawyers, John Clune and Baine Kerr, told the Tampa Bay Times that that amount is inaccurate. Kinsman's lawyers did not specify just how much of the settlement money they received. Further the settlement means that Kinsman will drop her Title IX lawsuit against the school and receive an undisclosed amount (the Tampa Bay Times reported that she will receive $250,000, but Clune told Romper that that amount is not accurate).

Winston was never charged by police for the alleged rape and maintained that the sex was consensual, according to the Associated Press. Winston never gave a specific statement to the press about the incident. Further, a student code of conduct hearing cleared Winston of the charges within Florida State. FSU officials said the settlement didn't mean it was agreeing that it violated Kinsman's rights. Rather, USA Today reported, the university president, John Thrasher, said in a statement that FSU settled to avoid incurring even more legal costs:

We have an obligation to our students, their parents and Florida taxpayers to deal with this case, as we do all litigation, in a financially responsible manner. With all the economic demands we face, at some point it doesn’t make sense to continue even though we are convinced we would have prevailed.

The Tampa Bay Times reported that the nearly $1 million settlement is believed to be the largest amount paid to a single plaintiff in a Title IX sexual assault case.

The December 2012 incident between Kinsman and Winston has received widespread media attention in the last few years. On the night of her encounter with Winston, Kinsman told police that she had been raped, according to the Tampa Bay Times. A few weeks later, she identified Winston as the alleged perpetrator. At the time, Winston was FSU's starting quarterback.

In the documentary The Hunting Ground, which criticizes a number of universities for their handling of sexual assault cases, Kinsman broke her anonymity and claimed that she was harassed by students for her allegations. The documentary even showed footage of students calling Kinsman a liar and of death threats she received, according to the Washington Post. Kinsman later dropped out of school.

Winston was allowed to play football for the school throughout the investigation of the incident. A year after the encounter, he won the Heisman Trophy and helped the Seminoles win their third national championship, according to the Orlando Sentinel. In December 2014, now-retired Florida Supreme Court justice Major B. Harding determined that there wasn't enough evidence to charge Winston with a crime or prove that he violated the FSU code of conduct, according to the Orlando Sentinel.

USA Today reported that the settlement will have no impact on an ongoing investigation into FSU's handing of the incident by the U.S. Department of Education's Office for Civil Rights. The agency opened that investigation in April 2014 after Kinsman filed a complaint earlier that year.

Kinsman released a statement after the settlement, according to the Sentinel:

I’ll always be disappointed that I had to leave the school I dreamed of attending since I was little. I am happy that FSU has committed to continue making changes in order to ensure a safer environment for all students. My hope is that the federal investigation of my complaint by the Office of Civil Rights will produce even more positive change, not just at FSU, but across the country.

FSU has maintained that it provided Kinsman with counseling after she told officials about the allegations. Still, Thrasher said in a statement that the school is making a number of changes to how it handles Title IX sexual assault cases that Kinsman's lawyers said were crucial to the settlement. Thrasher said the university will hire a full-time Title IX coordinator, form a sexual assault prevention task force, add six university positions for on-campus safety, and will publish annual reports for the next five years about what it's doing to prevent campus sexual assault, according to the Sentinel.

Kinsman and Winston are still in the middle of lawsuits against each other: Kinsman filed a civil suit against Winston for sexual battery (he has maintained through lawyers that their encounter was consensual sex), and Winston has sued Kinsman for defamation, according to the Tampa Bay Times. Though Kinsman herself has not issued a statement about the defamation lawsuit, her lawyers have argued that her statements are protected under Florida's defamation law, which make her speech "constitutionally protected," according to Tomahawk Nation.

More Like This
Yellowstone Season 5 Officially Has A Premiere Date
Meghan Markle Calls On Men "To Be Vocal" In The Aftermath Of Roe v. Wade Ending
Sea Monsters, Pandas & Everything Else Coming To Netflix In July 2022 For Families
Elmo Talks About Getting His Covid Vaccine In A Cute New Video