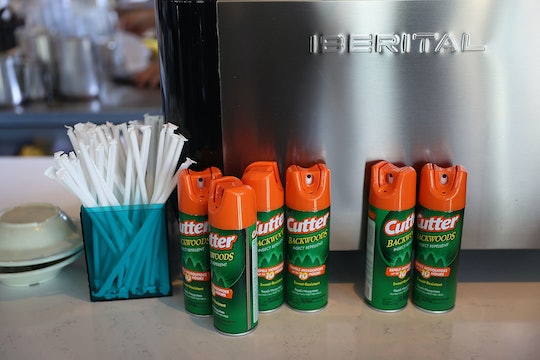 Now that the total number of locally transmitted cases of Zika in the Miami, Florida area has risen to 37, health and government officials are ramping up their efforts to prevent further spread of the virus. Part of this new effort is an educational plan for Florida students to receive bug spray and Zika lessons, which seems like an especially savvy way to approach the escalating public health situation. As reported at ABC News, officials are taking advantage of the start of the school year by providing schools and classrooms with extra bug spray, plus training for teachers on how to instruct students on mosquito bite prevention.

These efforts are particularly focused on the hot spots where local transmission has been pinpointed, which includes a one-square-mile area in the Wynwood neighborhood north of downtown, and a 1.5-square-mile area of Miami Beach, a favorite for tourists. On Monday, Florida Gov. Rick Scott visited a Wynwood middle school as part of his administration's effort to encourage schools to participate.

Miami-Dade Superintendent Alberto Carvalho visited Jose De Diego Middle School in Wynwood on Monday as well, and he had a message that puts the Zika outbreak into perspective. "Look, Zika is a threat, but not a threat to young kids," he told a group of reporters. "It is a threat to pregnant women... I'm not hearing deep concern from parents. They want the information, and we have curriculum for the kids and the parents alike."

Aside from passing out free bug spray and informational cards, Florida Department of Health staff will also be on hand in the transmission zones to answer questions and monitor campuses for standing water, according to the Palm Beach Post. Additionally, schools are relaxing uniform codes so that students can wear long-sleeved outfits, and Robo calls are going out to parents in the region, encouraging them to dress kids from head to toe. And according to The Miami Herald, long-sleeved uniforms will be distributed for free to low-income families in the Wynwood and Miami Beach areas.

The necessity to wear long sleeves was not appreciated by one Jose Lara, a 12-year-old who wore "a long-sleeved white shirt under a thick red and white checkered fleece hoodie" to school on Monday, according to The Miami Herald. "I can't even feel my body. I feel heavy and like I'm burning," he told a reporter. Jose's mom confirmed there had been a "major disagreement" about the outfit, while Jose noted optimistically that he'll change into lighter fare during gym class.

Amid these local efforts to halt the spread of Zika, the Centers for Disease Control and Prevention issued a statement last weekend, advising pregnant women and their partners to avoid travel to the Wynwood and Miami Beach areas.

And despite these growing concerns about Zika in Miami-Dade County, there's a new reason to be hopeful that kids like Jose won't need to wear long sleeves forever. The Herald reported this week that 6,000 mosquitoes were captured in the Miami-Dade region by state agricultural officials, and none tested positive for Zika. As the mosquito season in Miami continues, everyone can hope that the outbreak at least proves to be short-lived.